One of the main reasons newly-elected Nigerian president Muhammadu Buhari had been widely expected to lose his bid for a second term was the poor state of the country’s economy. Under his presidency, Nigeria’s unemployment rate more than doubled, from 10.4% in January 2016 to 23.1% in July 2018. 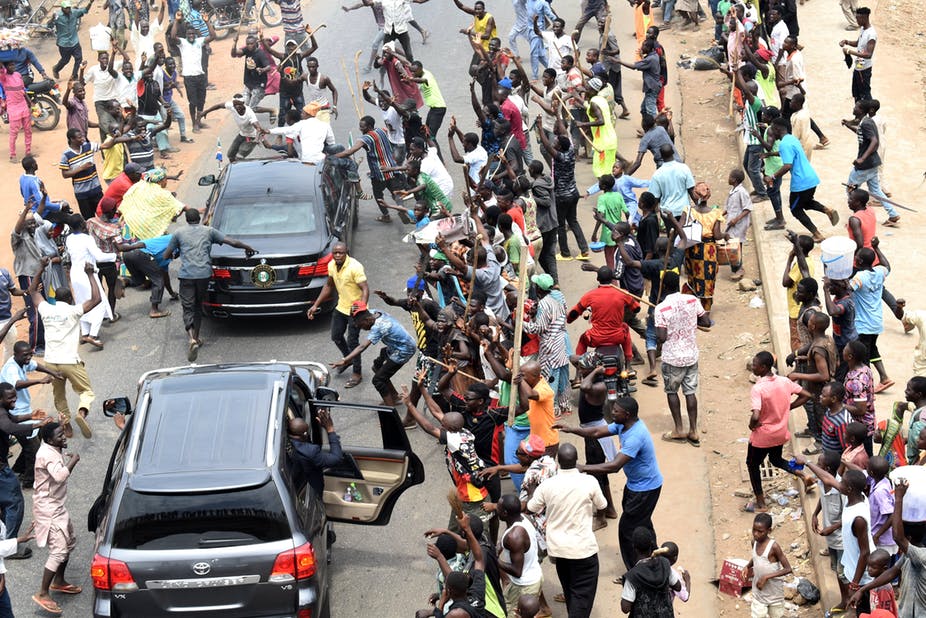 In his first four years, Buhari also failed to address poverty. Under his watch, Nigeria overtook India as the country with the largest number of people living in extreme poverty. About 87 million Nigerians, or half the population, live on less than US$1.90 per day.

And economic growth has been lacklustre since his election in 2015. The country went into recession in 2016, with a negative 1.6% growth rate. There was a rebound in economic growth of about 2% in 2018. Nevertheless the IMF forecasts that growth will remain anaemic at an annual average of about 1.9% from 2019 – 2023.

By reelecting Buhari despite his unimpressive economic performance, Nigerians are giving him a second chance. One of Buhari’s campaign catchphrases was “Next Level,” signalling his determination to build on programmes initiated in the first term. These include conditional cash transfers to vulnerable citizens, school feeding programmes, giving young people critical skills, and implementing a microcredit scheme for small traders and artisans.

But these initiatives, however noble, are not widespread and substantive enough to touch a majority of the Nigerian population. Buhari should be planning a massive stimulus package to jump start the economy. This is particularly important given the fact that economic growth is going to be so lacklustre.

Buhari’s response in the first term was to create jobs by providing credit to micro and small enterprises, especially in the agro-processing sector. But job creation by small enterprises usually takes time. And the number of jobs is never on the scale of large enterprises. The end result has been that most Nigerians feel economically marginalised in spite of Buhari’s best efforts.

The Buhari administration is well aware of the bleak economic conditions. In February 2017 it launched the ambitious economic and growth plan. Its overarching objective was to restore growth and build a competitive economy through investment in infrastructure and creation of an enabling business environment.

Laudable as the plan might have been, there’s a cynicism about whether Buhari will get any of it implemented given that he only has another four years in office.

I believe that he needs to be a great deal more bold, and to come up with a new set of interventions that truly take Nigeria to the “next level”.

The next level
Nigeria urgently needs a massive economic stimulus programme. If he can summon the energy, Buhari should significantly increase spending in sectors, projects and programmes that boost the economy, generate employment and promote inclusive growth. He should prioritise infrastructure, labour-intensive manufacturing such as textiles and footwear, agro-processing, youth entrepreneurship projects, health and education.

Nigeria has a very large stock of human and natural resources that aren’t being used optimally. Meanwhile, there is a huge infrastructural deficit. These range from dilapidated roads, epileptic electricity supply, acute water shortages, crumbling public buildings, grossly underfunded public tertiary institutions and so on. The gap can be closed through public works projects executed with direct labour.

The benefits of this are clear. These projects would provide temporary employment for unskilled workers in government-funded projects, which would enable these workers to gain experience needed for permanent jobs. In addition, the targeted stimulus spending on productive and value-creating projects would spur growth, while also addressing inclusivity. The beneficiaries of economic growth in Nigeria have typically been politicians, workers in the oil and gas sector, high-level public officials, and executives of financial institutions. A vast majority of Nigerians are usually left out.

Some may wonder how the Buhari administration could possibly finance a massive stimulus spending, given dwindling oil revenues and a volatile global oil market.

There’s an answer to this conundrum: Nigeria could follow the example of Asian countries that financed their stimulus programmes through domestic borrowing mainly by issuing government bonds. Borrowing money domestically in a local currency isn’t nearly as problematic as external borrowing.

Of course, financing stimulus spending via domestic borrowing comes at a price: it may crowd-out domestic private investment by raising interest rates. But this would be a temporary hiccup, as the increase in aggregate demand generated by stimulus spending would subsequently crowd-in investment in the production of goods and services. This ultimately will generate employment opportunities.

One of the usual concerns about stimulus spending is the risk of inflation. But unemployment, economic disempowerment and youth restiveness are bigger threats to the stability of the Nigerian economy in the short to medium term.

A big chunk of Buhari’s stimulus spending should be directed toward manufacturing and agro-processing. The manufacturing sector accounts for only 12% of employment in the country, down from a high of over 30% in the 1980s. During its heydays in the 1970s-1980s, the Nigerian textile industry alone employed almost 1 million workers. Today it employs about 30,000 workers.

According to the Manufacturers Association of Nigeria, the contribution of manufacturing to the country’s GDP has been flat at 4%. This is well below the 12% targeted by the government.

Taking charge
In this first term, Buhari ceded too much economic policymaking responsibility to Vice President Yemi Osinbajo. Though a brilliant lawyer and professor, Osinbajo has no experience in economic management.

To move the economy to the next level, and thus regain the trust of Nigerians who have given him a second chance, the president must surround himself with a more talented team of economists.

**********
Stephen Onyeiwu is Professor and Chair of the Economics Department, Allegheny College