Chicago wheat futures slipped on Thursday morning as dealers’ worries about crop losses from the recent frigid weather across the United States abated.

The most-active wheat contract on the Chicago Board of Trade (CBOT) slid 0.1 per cent to $6.47 a bushel after it had gained more than 3 per cent at $6.51 on Tuesday. 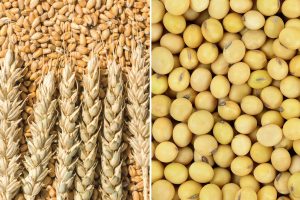 Meanwhile, soybean prices jumped on the back of strong demand, while corn remained unchanged.

Wheat supply is still under pressure and currently volatile as dealers hope that   temperatures moderate in the plains winter wheat belt over the next two weeks.

Phin Ziebell, agribusiness economist at National Australia Bank noted that the fall in price is a result of a decrease in cold weather damage to the US winter crop. He added that snow cover in some of the areas could have prevented the damage.

The market now awaits US acreage and usage forecasts from the US Department of Agriculture’s (USDA) annual two-day outlook forum, which begins on Thursday, February 18.

On the other hand, a higher demand continues to push soybean prices higher raising more hopes for suppliers in South America.

According to weather forecasts, more rainfall is expected in parts of Brazil in the week ahead creating more progression for soy harvesting in the world’s leading soybean producing country. Rainfall is also expected in Argentina which is likely to ease dryness, setting the pace for a better soybean production in the coming weeks.

A recent data released by the U.S National Oilseed Processors Association indicated that soybean processors in the country marked their second-largest monthly crush on record in January, the latest in a string of historically active months of soy processing for the second highest soy producers in the world.