BY STEWART PATERSON
Stewart Paterson is a Research Fellow at the Hinrich Foundation who spent 25 years in capital markets as an equity researcher, strategist and fund manager, working for Credit Suisse, CLSA and most recently, as a partner and portfolio manager of Tiburon Partners LLP. He holds an M.A. (Hons.) degree in Economics from the University of Aberdeen. 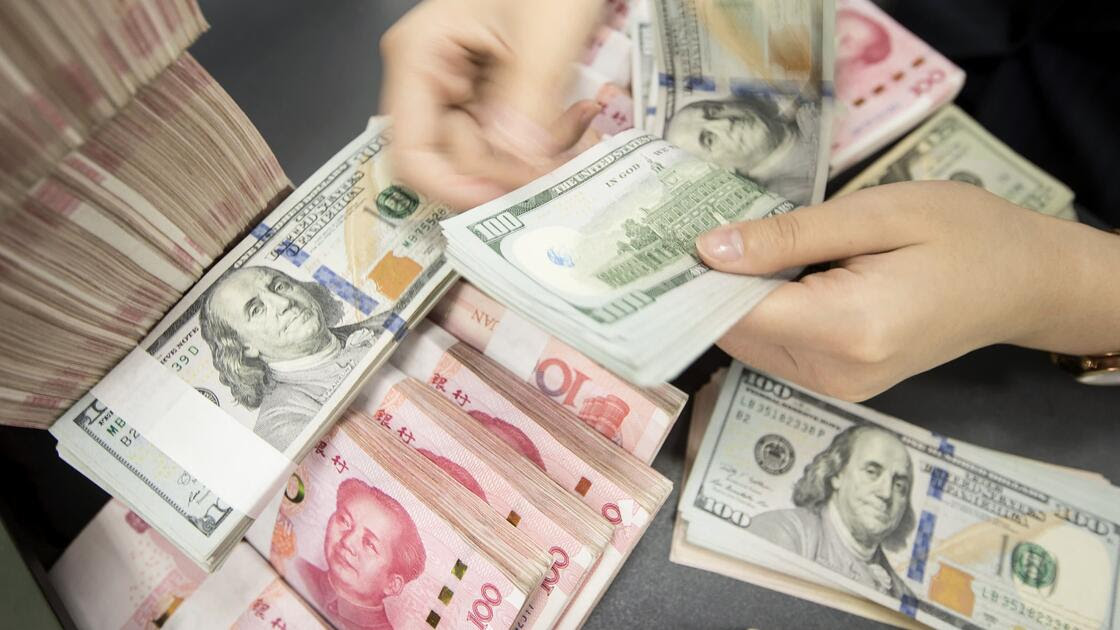 The damage of sanctions inflicted on Russia highlights the vulnerabilities of countries dependent on the global financial infrastructure led by Western nations. As the world’s largest trading economy, some have argued that China’s renminbi is well placed to bring an end to the dollar standard. However, three observations suggest that this line of reasoning may be overblown or premature.
Payment systems are critical to the functioning of global trade. Their evolution has lowered transaction costs and facilitated trade transactions.

However, in an era of great power competition, international payments systems and developments in financial infrastructure are increasingly associated with geopolitical rivalry. Russia’s invasion of Ukraine has highlighted the importance of control over the financial plumbing of the global trading system and the power to inflict devastating economic costs on targeted countries. This fear of not controlling the ability to trade openly spurred China to develop its Cross-border International Payment System (CIPS).
As a tool of economic statecraft, control over international messaging and payment systems is certainly powerful. It is too soon to tell with any accuracy the full impact of multi-country financial sanctions on the Russian economy. Early anecdotal evidence suggests that while the energy sector continues to be buttressed by the EU’s dependence on Russian oil and gas, the non-energy sectors of Russia’s economy is in free-fall. Some analysts are estimating a 7% contraction in real GDP growth for 2022. Given evident shortages in the retail sector, these estimates understate the true damage to the Russian economy.
Despite Russia’s best efforts to try to prepare for the eventuality of sanctions, such economic damage highlights the vulnerabilities of countries dependent on the global financial infrastructure led by Western nations. Several commentators have suggested that sanctions on Russia will serve to speed up the diversification of international reserves; increase the use of currencies other than the US dollar in trade; and consequently, undermine the status of the US dollar as the global reserve currency.
As the world’s second largest economy and largest trading nation, China is arguably in prime position to rival the global economic hegemony of the United States. It might follow, therefore, that the renminbi (RMB) is well placed to de-throne the US dollar as the global reserve currency – or at least become its chief rival and play a significantly larger role in global transactions. China’s move into international payments and settlement infrastructure and its lead in developing a Central Bank Digital Currency (CBDC) reinforce this impression.
The development of CBDCs may significantly impact the capacity of the state to tax, monitor the economy, and potentially capture seigniorage that currently lies with the commercial banking sector. CBDCs could also be a factor in lowering transaction costs in trade, especially tourism. China’s promotion of its CBDC will likely help spread the international use of the RMB.
There is some evidence to support China’s prospects. For example, the freezing of Russia’s foreign exchange reserves in some jurisdictions and the announcement that Saudi Arabia may accept RMB for oil exports to China encourage the idea that the current hiatus in global trade and finance furthers the case for an alternative financial infrastructure led by China. That possibility and a subsequently larger role for the RMB may bring an end to the dollar standard.
However, three observations suggest that this line of reasoning may be overblown or premature. First, Russia’s invasion of Ukraine is not likely an opportunity on which a country wishes to be seen to be capitalising, including China – even to promote the internationalisation of RMB. And China aims for the RMB to play a greater role internationally, not to replace the dollar entirely. China aims for its currency to become a greater part of the global system, not for its use to be limited to a range of sanctioned countries that are outcasts from the global system such as North Korea, Iran, and now Russia. Capitalising on the opportunity presented by the sanctioning of Russia may well end up severely limiting and slowing broader adoption of the RMB by responsible members of the international community. If the RMB is seen as the preferred currency of “outcasts”, China may find that even the RMB’s limited progress so far in mainstream adoption is reversed. Ultimately, a gradual build for the RMB – the ‘long game’ – may bring more legitimacy.
It could be argued that the RMB’s attraction has risen due to the sanctions, irrespective of China’s wishes. China does not need to pursue internationalisation because elements of the international community are pursuing China and the RMB. However, China needs access to the global economic system more than most countries do – for trade and technology transfer. Beijing is unlikely to jeopardise this by facilitating large-scale sanctions busting. Nor will Beijing want to induce economic punishment for overtly obstructing collective policy goals towards Russia, however “limitless” its Russian partnership may be.
Consider China’s challenges. The United States enjoys a very high degree of energy and food security; China does not. The United States enjoys a high degree of technological self-sufficiency. China remains dependent on the world for key inputs such as high-end semiconductors. While the United States still suffers from significant import dependencies, its position is stronger than China’s when it comes to reliance on the world at large for its continued prosperity. In short, it may not be in Beijing’s interest to risk economic sanctions itself if there is a perception that China is using the RMB and its financial system to bypass sanctions designed to curb rogue behaviour.
But what if we are wrong?
If indeed China’s financial system provides a work-around for western sanctions against Russia, we could see the global economy bifurcating far more rapidly. We would then not be able to rule out the potential for the United States and other countries to impose secondary sanctions on China. Indeed, US policy makers have indicated it is likely in such circumstances. When combined with China’s 2021 Anti Foreign Sanctions Law, which prohibits China-based entities from enforcing such sanctions, the very existence of foreign-owned businesses in China would become extremely challenging. Effectively, they would have to do what they dread: Choose sides. Multinational business models spanning both China and the western democracies could very quickly break down completely. This would unfold at a severe cost for the global economy – China included.
Businessamlive Website Stats