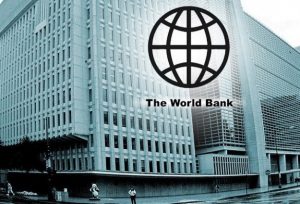 owth in the continent’s bigger economies.

“The slower pace of the recovery in Sub-Saharan Africa is explained by the sluggish expansion in the region’s three largest economies, Nigeria, Angola, and South Africa,” the bank said in a statement.

Sub-Saharan Africa had posted a fairly-fast average growth rate in the years leading up to 2015, suffered a loss of momentum in economic output after commodity prices crashed in 2015-16, leading to a recession in Nigeria.

According to the World Bank, lower oil production in Angola and Nigeria offset higher oil prices, and in South Africa, weak household consumption growth was compounded by a contraction in agriculture.

The World Bank report pointed at the steady growth of other countries in the region, including those that don’t depend on commodities, such as Ivory Coast, Kenya and Rwanda.

High public debt in some countries in the region, combined with weakening currencies and rising interest rates, could endanger their ability to service those debts, the World Bank warned.

“Policymakers in the region must equip themselves to manage new risks arising from changes in the composition of capital flows and debt,” Zeufack said.