The international market which has been extensively troubled by the devastating impact of the Russia-Ukraine crisis experienced a glimmer of hope following the gradual restoration of grain exports from Ukraine via the Black Sea region.
This came after the Joint Coordination Centre (JCC), officially inaugurated on July 27, 2022 in Istanbul, Turkey, comprising representatives of Ukraine, Russia, Turkey and the United Nations. 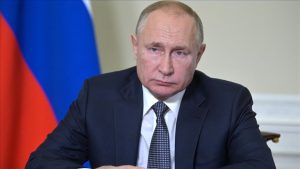 The JCC facilitated the implementation of the Black Sea Grain Initiative to establish a humanitarian maritime corridor to allow ships to export grain and related foodstuffs and fertilisers from Ukraine, with the aim to ease the global food crisis stemming from the war.
The meeting culminated in an agreement between the warring countries on the resumption of Ukrainian grain exports which had hitherto been  blocked by the Russian Federation. A similar agreement also guarantees that Russia can export produce and fertilisers to the world market  despite Western sanctions.
This  led to the first grain shipment of 26,527 tonnes of corn from Ukraine, destined for Lebanon, a country in Western Asia which has the world’s highest rate of food inflation at a staggering 122 percent and depends on the Black Sea region for nearly all of its wheat.
The Sierra Leone-flagged vessel Razoni thus became the first to set sail from the Ukrainian port of Odessa under a wartime deal since Russia launched  a wide-ranging attack on Ukraine on February 24, 2022.
In another positive development, three ships carrying a total of 58,041 tonnes of corn were authorised to leave Ukrainian ports on Friday as part of the deal to unblock grain exports, according to the JCC.
“The three outbound vessels are estimated to depart in the morning from their respective ports.
From Chornomorsk, the Polarnet would leave for Karasu in Turkey with 12,000 metric tonnes of corn and the Rojen would take 13,041 tonnes of corn to Teesport in Britain. From Odessa, the Navistar would take 33,000 tonnes of corn to Ringaskiddy in Ireland,” it stated.
The Ukrainian government also announced  that another 13 ships loaded with grain are waiting to depart and release  millions of tonnes of trapped Ukrainian produce to world markets.
The recent turn of events, according to industry players, experts and stakeholders in the commodities market, serves as a glimmer  of hope to not just Ukrainians who have for a long time been stifled from importation, but also to other countries around the world.
Commenting on the agreement, Antonio Guterres, the United Nations secretary-general said it is targeted at addressing growing fears over food security  and reducing pressure on high prices.  Guterres  added that a reopening of trade flows would also be welcome news to commodity traders concerned about losses arising from the blockade.
Dmytro Kuleba, Ukraine’s foreign minister described the move as a relief for the world, especially for countries  in the Middle East, Asia, and Africa, threatened by food shortages and hunger because of the disrupted shipments following months of Russian blockade.
The United States embassy in Kyiv, Ukraine also welcomed the shipping resumption, saying: “The world will be watching for continued implementation of this agreement to feed people around the world with millions of tonnes of trapped Ukrainian grain.”
Ngozi Okonjo-Iweala in a twitter post welcomed the departure of the first grain shipment from Ukraine and the resumption of the grain trade. Okonjo-Iweala maintained optimism that planned departure of more grain should hopefully bring down prices of international grain, aid humanitarian purchases and have a positive impact on poor people going hungry in poor countries.
In its assessment on the impact of the over-five months war, the World Bank reported that the  blockage of deliveries from two of the world’s biggest grain exporters had contributed to a spike in prices that has made food imports prohibitively expensive for most of the world’s poorest countries.
The international financial institution added that it has also been a major shock to global commodity markets as the supply of several commodities has been disrupted, leading to sharply higher prices, particularly for energy, fertilisers, and some grains such as wheat.
“Concerns about the war’s disruptive effects on commodity supply, the increases in prices were particularly pronounced for commodities where Russia and Ukraine are large exporters, including energy, fertilisers, and some grains and metals.
With the Black Sea region being a large exporter of fertilisers, the resulting shortages and price increases had translated into lower crop yields in many regions, leading to record-high food prices on a global scale. Commodity price volatility surged, with food prices reaching levels not seen since the 2007-08 price spikes,” the World Bank stated.
It added that beyond the broader impact on inflation, supply disruptions of key commodities had severely affected a wide range of industries, including food, construction, petrochemicals, and transport.
As the global commodities sector heaves a sigh of relief over the grain shipping resumption, economic analysts have called for cautious optimism among investors, noting that the development does not ultimately guarantee an end to soaring prices of food commodities,
Gabriel Felbermayr, an Austrian economist and president of the Austrian Institute of Economic Research, noted that the fact that Ukraine and also Russian commodities are now more easily going onto the world markets is good, but that volatility will remain high. Felbermayr added that  the shortages around the globe are not only caused by the war but also by climatic conditions.
“Cautious optimism is ripe among many farmers hoping to sell as much of their grain as possible while the negotiated corridor remains open,” he said.