The world’s richest people lost $35 billion Wednesday when global equity markets were rocked by political turmoil in the U.S., according to the Bloomberg Billionaires Index.

Bill Gates, the world’s richest person with $86.8 billion, lost $1 billion as shares of Microsoft Corp., his largest holding, tumbled 2.8 percent, the most in almost a year. Amazon.com Inc. co-founder Jeff Bezos, who came within $4 billion of taking the top spot from Gates earlier this week, dropped to No. 3 after losing $1.7 billion as shares of the online retailer slid 2.2 percent. Spanish retailing tycoon Amancio Ortega lost $355 million to end the day in the second position with $83.2 billion. 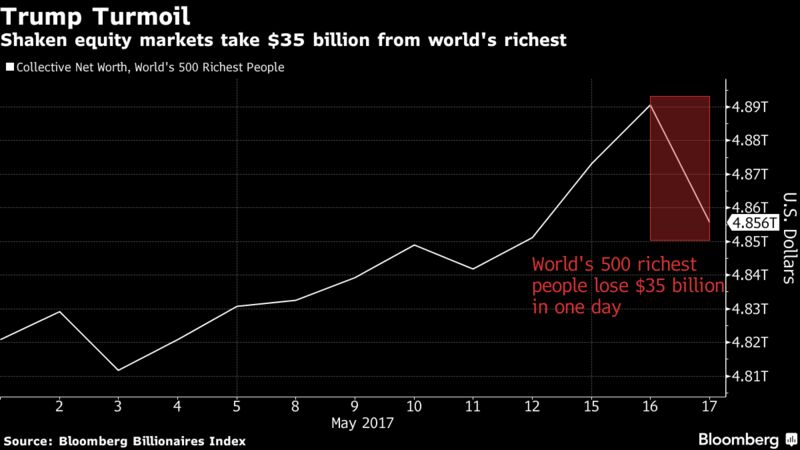 Facebook Inc. founder Mark Zuckerberg was hardest hit in the tumult, dropping $2 billion when the social media giant dropped 3.3 percent. Zuckerberg is the fifth-richest person on the planet with $62.3 billion, according to the index. Trump, the first billionaire to serve as U.S. president, has a net worth of $3 billion and doesn’t have a spot on the Bloomberg index, a daily ranking of the world’s 500 richest people. They have a combined net worth of $4.9 trillion, up $455 billion in 2017.