Zenith Bank Plc, one of Nigeria’s systematically important bank, has maintained its strong Tier-1 position, with the delivery of strong operational performance in its 2020 full year financials just released. 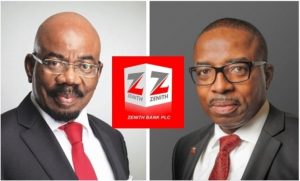 Despite the economic disruption brought about by the covid-19 pandemic, the bank showed resilience in 2020 reporting a robust set of numbers with a 5.2 per cent year-on-year growth in its gross earnings to N696.45 billion from N662.25 billion in 2019, as contained in the bank’s financial statements and independent auditor’s report for the year ended December 31, 2020, filed with the Nigerian Stock Exchange.

The bank’s full year profit jumped by 10.4 per cent year-on-year to N230.6 billion, with a reduced tax expense of -26.6 per cent, from the N208.84 billion recorded in the previous year. The company’s robust results were on the back of a strong performance in its 9M 2020 results, when it reported mid-single-digit growth in gross earnings and profit.

The strong gross earnings growth was primarily driven by a blockbuster 256.9 per cent year-on-year growth in other operating income, partially offset by a 10 per cent decline in fee and commission income. Also, Zenith Bank managed to keep personnel expenses in check during the year under review as it increased by a mere 1.8 per cent.

Operating expenses also grew by 10.4 per cent year-on-year but still tracking well below inflation, which at the end of the year stood at 15.75 per cent while the bank’s profit before tax was up by 5.2 per cent from last year to N255.9 billion.

A further breakdown of the audited financial statement of shows that the bank managed to report a 1.3 per cent rise to N420.8 billion in interest and similar income while cutting down the interest expense by 18.4 per cent year-on-year to N121.1 billion, resulting in an impressive 12.2 per cent increase in net interest income.

However, due to the pandemic, impairment loss on financial and non-financial instruments sharply rose by 64.5 per cent to N39.5 billion, leaving net interest income after impairment loss growth at 7.1 per cent from the previous year, to N260.1 billion in 2020.

The bank reported that its net fee and commission revenue sank 20.8 per cent to N79.3 billion. Meanwhile, trading gains improved 3.3 per cent year-on-year to N121.7 billion in 2020 full year. Resultantly, the bank reported an 8.5 per cent jump in non-interest income to N251.7 billion in full-year 2020, primarily driven by ‘other’ operating income.

Although returns on equity and assets also reduced from 23.8 per cent to 22.4 per cent and from 3.4 per cent to 3.1 per cent, respectively, the Group still delivered improved Earnings Per Share (EPS), which grew 10.4 per cent year on year from N6.65 per share to N7.34 per share in the year 2020 results.

Furthermore, the bank’s increased retail activities translated to an increase in retail deposits and loans. Thus, the retail deposits grew by N612.7 billion year-on-year to N1.72 trillion, while the savings balances significantly vaulted 88 per cent from the prior year to close at N1.16 trillion. Though, it is evident that this retail drive, coupled with the low-interest yield environment, helped reduce the bank’s cost of funding from 3 per cent to 2.1 per cent and reduced its interest expense. However, the low-interest environment also affected the net interest margin, which declined 30 basis points year-on-year to 7.9 per cent in the year 2020 due to the re-pricing of interest-bearing assets.

Consequently, despite the COVID-19 pandemic and its associated challenges within the financial services sector and the economy at large, the Zenith Bank Group managed to create new viable risk assets as total gross loans grew by 18.6 per cent to N2.92 trillion in the period under review.

This was achieved while maintaining a stable and low overall non-performing loan (NPL) ratio of 4.29 per cent as against the 2019 rate of 4.30 per cent across the entire portfolio.

However, there was an increase in the cost of risk from 1.1 per cent to 1.5 per cent, reflecting the high-risk environment in 2020. The Group also recorded an impressive liquidity and capital adequacy ratios of 66.2 per cent and 23.0 per cent and remained above regulatory thresholds of 30 per cent and 15 per cent, respectively.

The banking group’s total assets climbed 33.6 per cent year on year to N8.48 trillion as it also increased corporate customer deposits, which alongside the growth in retail deposits delivered total deposit growth of 25 per cent, closing at N5.34 trillion in FY20.