Zimbabwe has brought back its own currency, the Zimbabwe dollar, just over a decade after its usefulness was destroyed by hyperinflation. 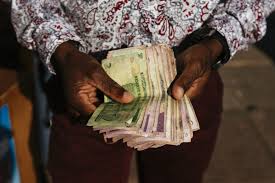 The central bank said that effective immediately, currencies including the U.S. dollar and the South African rand, in use since 2009, will no longer be accepted as legal tender. A local quasi currency known as bond notes, which was introduced in 2016 but can’t trade outside the country, and their electronic equivalent, the RTGS dollar, will now be known as the Zimbabwe dollar.
The authorities had abandoned the Zimbabwe dollar after inflation reached an estimated 500 billion percent in 2008, according to the International Monetary Fund. While the country has since used a basket of currencies from the continent and abroad as well as bond notes and the RTGS$, some government departments and agencies have until recently demanded payment in the greenback.
The central bank made it clear in its announcement that money held in foreign-currency accounts will not be affected, but the step will be greeted with alarm and memories of the lives wrecked and pensions and savings lost in 2008. Recollections of what effectively became a barter economy in a country where a suitcase full of bank notes was needed to purchase a pair of jeans will be hard to erase.
The central bank also announced a series of other measures, including raising the rate on its overnight window to 50% from 15%, to buttress the currency.
“Any attempt by the officials to bring a new currency would require confidence,” said Jee-A van der Linde, an economist at NKC African Economics in Paarl, South Africa. “People aren’t sure that there’s something backing the currency. There’s no way that something like this will be maintained. People will not trust the currency. It will promote more off-market activity even more if that’s possible.”
Zimbabwe’s official currency trades at a discount on the street
In February, the central bank introduced the RTGS$ and said it and bond notes would no longer be pegged to the U.S. currency. This precipitated a rapid depreciation in both the newly introduced interbank rate and the black-market value. Inflation, at 97.9%, is now at its highest since at least 2008.
This “will worsen the situation,” said Christopher Mugaga, the chief executive officer of the Zimbabwe National Chamber of Commerce. Companies “with real dollars will simply go underground,” he said.
Finance Minister Mthuli Ncube said Monday’s announcement gives the central bank “flexibility” to conduct monetary policy. The authorities in Zimbabwe have previously said the central bank plans to establish a Monetary Policy Committee.
“We can also expect the creation of a monetary policy committee as part of the micro institutions that are going towards stabilizing the value of the currency,” he said on state television.
Businessamlive Website Stats