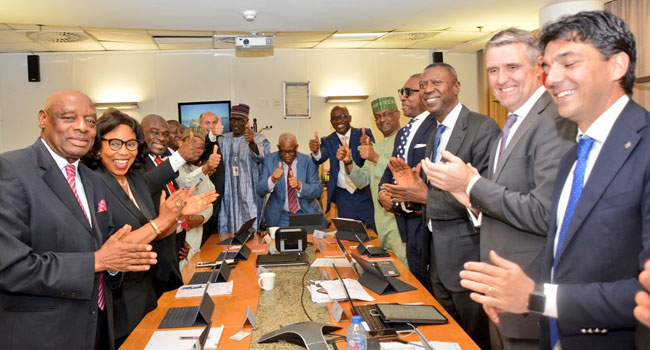 Nigeria LNG Limited (NLNG)  on Friday in Abuja took the final investment decision (FID) for its Train 7 project, signalling the commencement of construction of the 7th Train at the Bonny facility of the company.

This decision allows the expansion to increase the capacity of NLNG’s six-train plant from the extant 22 million tonnes per annum (MTPA) to 30 MTPA, with the award of contracts for the engineering, procurement and construction activities to follow the closure of bank and export credit agency (ECA) financing, and the finalization of some key supporting commercial agreements expected in early 2020.

The actualisation of the Train 7 Project comes as NLNG celebrates 30 years of its incorporation and 20 years of operations since exporting its first LNG cargo in 1999.

According to Tony Attah, MD/CEO of NLNG, “Train 7 is the crux of a growth agenda which will ensure the Company’s position as the 5th major supplier of global LNG is maintained, increasing value to its Shareholders and other stakeholders, as well as further reducing the gas that would otherwise have been flared, in fullfilment of its vision of ‘being a global company, helping to build a better Nigeria’”.

He further said that “over 12, 000 jobs will be created during the peak of construction, trade and commercial activities within the Niger Delta region equally receiving a boost as a result. The Project will also support the development of local engineering and fabrication capacity in the country. Other opportunities for local content include procurement, logistics, equipment leasing, insurance, hotels, office supplies, aviation, haulage, and many more.”

The Company further said that the Project upon completion will support the Federal Government’s drive to diversify its revenue portfolio and generate more revenue from Nigeria’s proven gas reserves of about 200 Trillion Cubic Feet (Tcf). The construction period after FID will last approximately five years with first LNG rundown expected in 2024.