Global: Global markets extended last week’s losses into this week as major indices around the world closed in the red w/w. Starting in Asia, rising covid infections in China continue to weigh on interest in the region, as concerns over new movement restrictions rise. The Chinese economy faced a slowdown due to the pandemic-related lockdowns which has weighed on the country’s stock markets. Meanwhile on the macro front, Japanese industrial production and retail sales increased 0.3% and 2% respectively in March. Still in the region, Samsung Electronics reported Q1’22 earnings and saw operating profit surge 51% y/y c.$11.1 billion. For the week, the Shanghai Composite and Nikkei 225 eased 1.29% and 0.95% respectively. 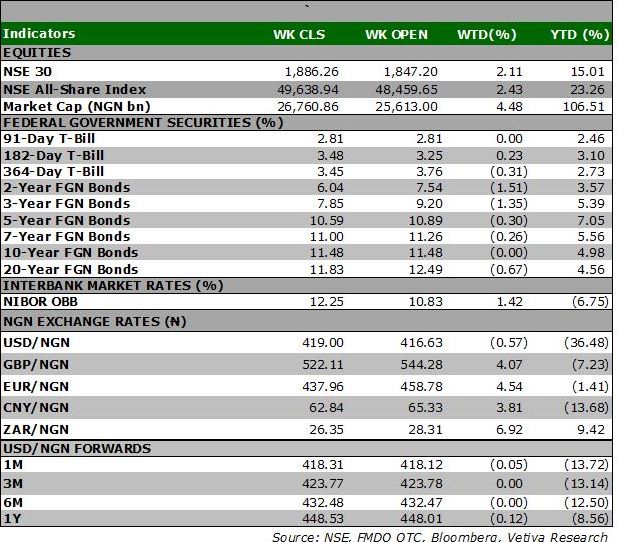 Similarly in Europe, investor activity was largely sell-side driven with the German DAX and French CAC trading in the red, down 0.33% and 0.51%, while the London-based FTSE-100 was up 1.04% w/w. With earnings season in full swing, investors also kept an eye the latest macroeconomic data coming out of the region; with the UK house prices, German and Eurozone GDP reports, as well as Eurozone inflation data released on Friday. Finally, in the U.S., markets traded in a mixed manner, recording minimal gains and losses w/w. The U.S. economy shrank in Q1’22, as GDP growth fell 1.4%, despite a surge in business investments and consumer spending. For the week, the Nasdaq Composite and S&P 500 were down 0.20% and 0.16% at time of publication, while the Dow Jones was up 0.20% w/w.

Domestic Economy: Due to the impact of the Russian-Ukraine crisis on oil prices, the International Monetary Fund raised its outlook for Nigeria. The Fund raised its GDP growth forecast by 0.7 percentage points to 3.4%. On the flip side, the Fund expects inflation to average 16.1% in 2022 (previously: 13.25%). We believe the bearish estimate is linked to fuel shortages, food insecurity and exchange rate pressures. However, we see room for moderation in food inflation as the Federal Government reopens more land borders.

Equities: It was a positive week of trading for Nigerian equities as the NGX rose 2.43% w/w to settle at 49,638.94pts. The Oil and Gas space continues to enjoy significant investor patronage, as the sector soared 10.20% w/w. SEPLAT ENERGY (NGX: SEPLAT, +16.50% w/w) has entered a price discovery stage as it continues to set new all-time highs; higher oil prices continue to support the positive sentiment observed in the counter, and broader sector. Similarly, the Consumer Goods space has seen a reversal of fortunes as the sector gained 6.35% w/w; a key driver of the gains witnessed by the sector came from players in the breweries space, as NB and GUINNESS rose 17.25% and 13.07% respectively, while UNILEVER also supported gains with a +11.48% return w/w. Meanwhile, in the Industrial Goods space, tepid interest in the sector this week, saw it rise 0.51% w/w. Finally, it was a week of sell-side action in the banking space, as investor focus shifted to the latest earnings from the Tier-I players; the sector fell 1.50% w/w, weighed down by losses observed in ZENITHBANK (-3.16% w/w) amongst others. 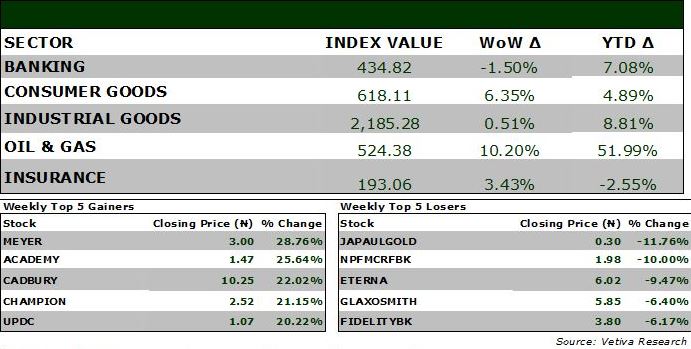 Equity market: This week’s impressive market performance saw the oil and gas sector contributing the most to the positive close with a gain of 636bps as investors bought up OANDO and ETERNA. We anticipate a mixed session to start off the week amid slight profit taking activities across board.

Fixed Income: Next week, the bond market should trade on a muted note as investors await the outcome of the bond auction on Monday. We also expect the T-bills segment to trade on a quiet note due to a dearth of bids in the market.
Currency: We expect the naira to remain largely stable across the various windows of the currency space as the CBN maintains interventions in the FX market.

In ACCESSCORP’s recently released its Q1’22 results, the company reported 33% y/y growth in Gross Earnings to ₦296 billion, 12% above our expectation (₦261 billion). The bank reported 21% y/y growth in Interest

Despite the impressive income growth, Net Interest Income came in 7% lower y/y at ₦87 billion due to a 73% y/y expansion in Interest Expense to ₦86 billion, after interest paid on deposits more than doubled y/y. Part of this can be attributed to the bank’s impressive 32% y/y deposit growth reported in Q1, with a balance of ₦7.5 trillion, coming in 8% higher than the FY’21 figure. This, coupled with a 40bps rise in cost of funds, resulted in the high Interest Expense bill.

Cost-wise, Loan loss provisions grew by only 9% y/y to ₦13.7 billion (Vetiva: ₦17 billion), while Opex expanded faster than expected at 28% y/y to ₦117 billion (Vetiva: ₦100 billion), driven by a 27% y/y rise in AMCON charges and a surprising 46% y/y jump in staff costs, specifically wages and salaries. Ultimately, the bank reported an 8% y/y growth in PBT to ₦65 billion and 9% higher PAT of ₦57 billion.

ACCOSSCORP’s balance sheet grew 33% y/y, with total assets rising to ₦12.1 trillion amid a 10% rise in Investment Securities and a 3% loan book expansion. While these expansions are likely to drive stronger interest income growth, the 32% rise in deposits, especially the 55% y/y rise in expensive Time deposits will likely affect interest expense as seen in Q1. Thus, we have adjusted our FY’22 balance sheet growth estimate to 12% (Previous: 4%) and predict a full-year figure of 13.1 trillion in total assets (Previous: ₦12.2 trillion).