Back when African countries were auctioning off mobile licenses by the boatload to serve the region’s young, tech-savvy population, investing in the continent’s fast-growing economies seemed like a no-brainer. Some of the world’s biggest wireless carriers rushed in.

Now they’re wondering if they made a mistake. Increasing government and regulatory scrutiny, as well as a lack of expansion opportunities in sub-Saharan Africa, are making it harder for operators such as Vodafone Group Plc, Orange SA and Bharti Airtel Ltd. to grow. Their choice: Pull back or double down.

Two companies beating at least a partial retreat are Millicom International Cellular SA, which disposed of its Senegal and Democratic Republic of Congo units, and India’s Airtel, which sold businesses in Burkina Faso and Sierra Leone to Orange earlier this year. Reducing its exposure to Kenya, Vodafone transferred most of its $3.6 billion stake in Nairobi-based Safaricom Ltd. to majority-owned South African unit Vodacom Group Ltd. in May, and may pare further. That leaves Vodafone Ghana as the U.K. company’s sole own-branded African operation.

“At this point it is becoming clear who has a chance of making it in Africa and who does not, and it essentially boils down to scale, as well as government sway,” said Baha Makarem, an analyst at Arqaam Capital. “It’s just a question of who is ready to weather the storm.” 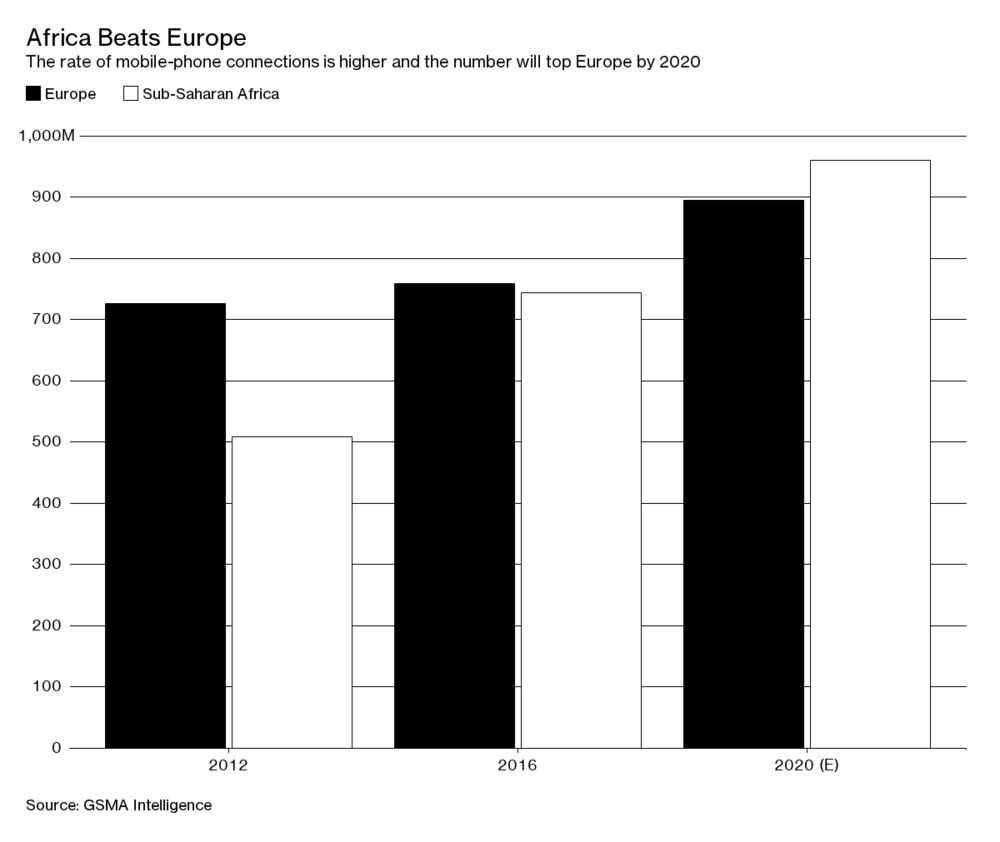 The shift in sentiment comes as governments across sub-Saharan Africa are losing favor with investors. The fall in commodity prices has reduced tax revenue in many countries, and average economic growth slumped to 1.4 percent last year from 3.4 percent in 2015, according to the International Monetary Fund. That’s encouraged lawmakers in countries including Tanzania and Ghana to look to international companies for revenue opportunities—both have ordered foreign wireless carriers to cede shares to local investors.

“The regulatory challenges are top of our mind at all times,” MTN Group Ltd. Chairman Phuthuma Nhleko told shareholders at the annual meeting of Africa’s biggest wireless carrier on May 25. “It’s just part of the environment in which we operate.”

Nhleko has firsthand experience with that. A Nigerian watchdog fined the carrier $5.2 billion in 2015 for missing a deadline to disconnect unregistered subscribers, leading to a slump in the share price that’s yet to turn around. The penalty was reduced to $1 billion after months of negotiations and Nhleko has since overhauled management and corporate governance. Even so, MTN was fined $8.5 million in Rwanda in May for non-compliance with its license obligations. The company, Africa’s biggest carrier by sales, hasn’t yet delivered on a promise to list its Nigerian unit in Lagos.

Vodacom, 70 percent owned by Vodafone, has complied with Tanzania’s demand to sell shares on the Dar es Salaam stock exchange. It had to delay the listing when a surge in demand from retail investors slowed the processing of applications from outside the country. 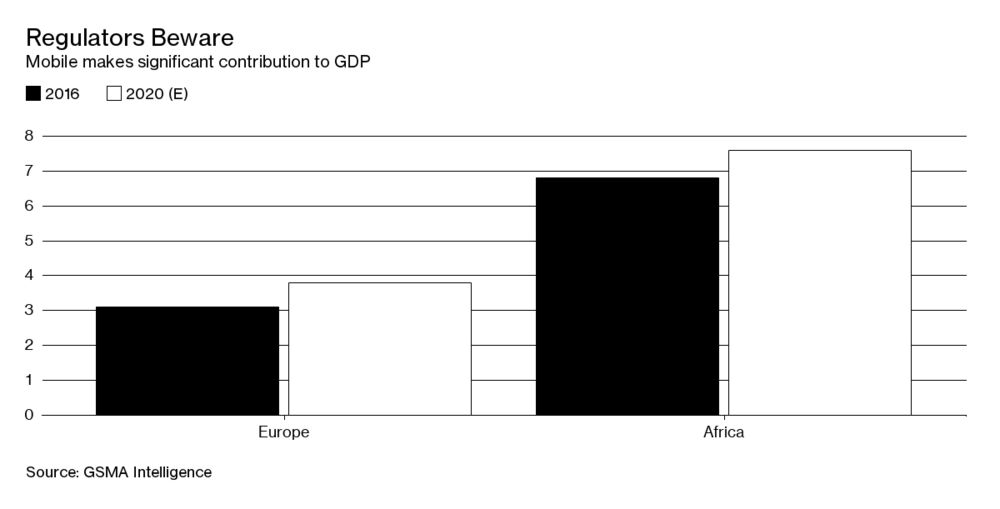 IPOs are the only way to force the wireless carriers to share their profits with local investors in the East African country, Tanzanian President John Magufuli said last month, adding that licenses could be withdrawn if they refuse the order.

“It is not enough to just subject the mobile-phone companies to fines and allow them to continue minting billions of money in profits,” the local Daily News quoted him as saying.

Not everyone is down on Africa, where GSMA Intelligence expects mobile revenue will reach $43 billion in 2020. Orange, France’s market leader, in February called Africa a priority region and has focused most of its investment in French-speaking markets such as Cameroon and Ivory Coast.

That’s partly to offset stagnating growth in Europe and to take advantage of a younger population demanding faster and cheaper data, according to Bruno Mettling, the Paris-based company’s head of operations on the continent. A lack of obsolete infrastructure that would need to be removed or upgraded is also underlying the business case, he said.

Some operators “are withdrawing from Africa in the face of the enormous investments to be made—3G, 4G, but also in the fiber to connect the antennas to each other,” Mettling said. “At Orange, we invest an average of 1 billion euros ($1.1 billion) in Africa each year.” 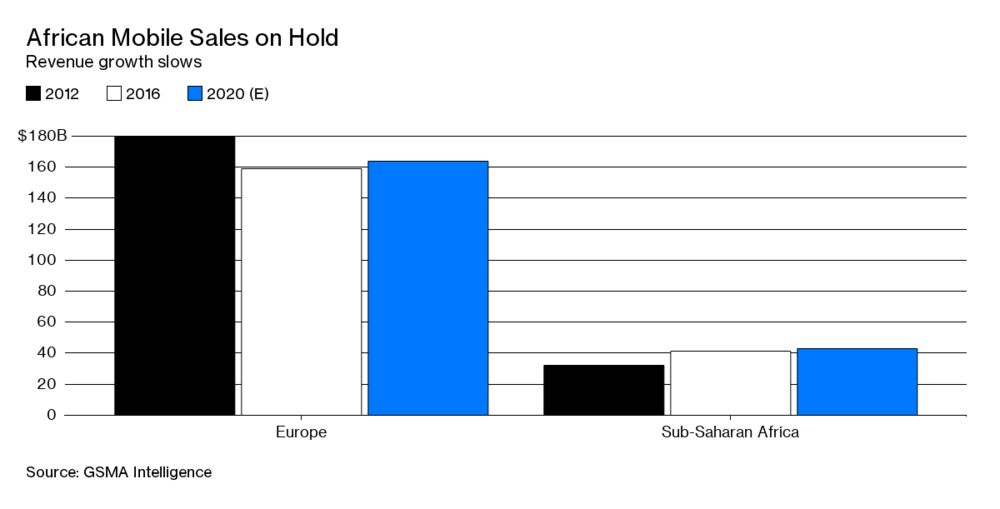 Areas of expansion for Orange include mobile banking, where Nairobi-based Safaricom blazed a trail with its M-Pesa product in Kenya. Orange Money reported a 74 percent increase in customers, to more than 30 million, in the first quarter, and plans to extend the service into its home market this year. Orange’s francophone markets have so far stopped short of ordering share sales to local investors.

Vodacom, Africa’s biggest carrier by market capitalization, is another considering further expansion following the Safaricom deal. The tougher market and increasing willingness of some rivals to sell may have brought down prices, Chief Executive Officer Shameel Joosub said at the company’s results presentation in May.

“The days of you going in with a new greenfield license are gone,” Joosub said. The price of potential acquisition targets is, however, “becoming more reasonable,” and there “are not that many buyers.”

The first wave of second-generation digital mobile licenses in Africa started in the late 1990s, with Nigeria being one of the last countries to issue its first permit in 2001. While those markets have since been growing—more than half the continent’s population is seen owning a smartphone by 2020—the only country yet to auction licenses is Ethiopia.

“Africa is a market of growth, but also a very difficult environment to operate,” said Dobek Pater, managing director of Pretoria-based Africa Analysis. “Costs of operation are often high, disposable income levels of large segments of the society low, and the regulatory environment not always predictable. Only companies with “increasing economies of scale will succeed.”