With its reputation for political neutrality, peaceful civility, and purveying the finer things in life, it should come as no surprise that Switzerland has once again topped the U.S. News and World Report Best Countries list for 2022. 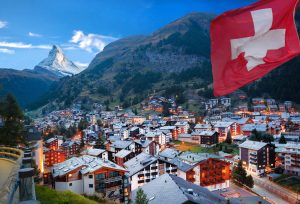 Switzerland has claimed the top spot for five of the seven years the rankings have been complied, regaining the position after slipping last year to No. 2 behind Canada. But it’s more than just gorgeous mountain vistas, delicious chocolates, and precision watches that make Switzerland seem like utopia. The country of nearly 8.7 million people has a robust economy, very high standard of living, extremely low crime, and a sense of social harmony.

“You can’t say a negative word about Switzerland,” Wharton marketing professor David Reibstein, who helped create the rankings, said in an interview with Wharton Business Daily on SiriusXM. “Switzerland is sort of positive on everything. They are clearly viewed as this neutral country, so while the world is in turmoil, Switzerland is at peace.”

Reibstein produces the rankings annually in partnership with U.S. News & World Report and BAV Group, a unit of global marketing communications company VMLY&R. The 2022 list measures perceptions about 85 nations chosen because they contribute most to the world’s GDP. More than 17,000 people around the world were asked to evaluate the countries based on 73 attributes ranging from political stability to racial equity to health consciousness. One-third of the survey respondents were business leaders; one-third were college-educated individuals who were middle class or higher; and one-third were from the general population.

Reibstein said the two biggest factors that bolster global perceptions of Switzerland are its quality of life — including well-developed public education and health care systems — and cordial business environment. Switzerland scored a perfect 100 in the subcategory of “open for business.”

“In terms of being open for business, they are certainly not viewed as being corrupt, they’re not viewed as being bureaucratic, and they’re pretty transparent in terms of their other government practices. I think those all play a role,” Reibstein said. “I could go into many, many more details of where Switzerland just rises to the top, but I think that gives you a quick flavor for it.”

Germany Is a Strong Second

Germany, Europe’s most populous country with 83 million people, secured a strong second place in the overall rankings. It also has a robust economy based on open-market capitalism and a highly skilled workforce. Germany received a perfect 100 score on the subranking of entrepreneurship. It also scored a very high 92.1 on agility, which is defined as a country’s ability to adapt to obstacles and crises.

Reibstein said Germany should be applauded for its agility, noting the country’s effective response to the COVID-19 pandemic and its leadership role in the European Union, especially after Brexit.

“They are seen as being very adaptable. And frankly, they have been dynamic. They are relatively progressive,” he said. “Overall, they’re viewed as a powerful country, without any question about it.”

What About the United States?

Canada, the United States, and Sweden round out the top five, respectively. The United States has never taken the No. 1 spot, a fact that Reibstein said surprises many of the people he talks to about the rankings.

The U.S. notched up to No. 4 this year. When the ranking premiered in 2016, America was fourth, then slipped to No. 8 a year later, and climbed back up to No. 6 in 2021. Reibstein believes the 2017 slide reflected the political landscape in the U.S. because the data was collected after the tumultuous 2016 election that put President Donald Trump in the White House.

“The United States no question has been viewed as a leader and clearly viewed as the most powerful country in the world,” Reibstein said. “We may not have that self-perception, but definitely the United States is viewed as very, very powerful.”

Russia, where the survey was not conducted this year, was one of the biggest movers down the list, sliding 12 spots to No. 36. Reibstein said President Vladimir Putin’s aggressive invasion of Ukraine is to blame for the dramatic shift in the global perception of Russia — but it’s complicated. In an article he wrote for U.S. News & World Report, he explained that when a significant event such as war or a corporate scandal triggers a shift in the rankings, the shift is usually uniform. In other words, the country in question takes a reputational hit across the globe.

But Russia is different. There are a handful of countries — notably China, Egypt, and India — that see the war in Ukraine as favorable to Russia. Meanwhile, Ukraine’s scrappy response to the invasion has bolstered its reputation, moving it up from No. 71 last year to No. 62 this year.

Reibstein said the changes are a reminder that world views are shaped largely through the lens of the viewer.