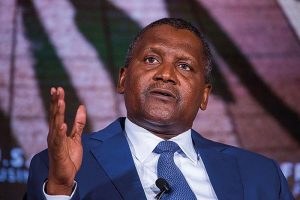 The Central Bank of Nigeria and the private sector, led by Aliko Dangote Foundation and Access Bank, have set up a coalition aimed at raising N120bn towards the fight against COVID-19 in Nigeria.

Godwin Emefiele,the governor, Central Bank of Nigeria, said at a press briefing in Lagos on Thursday that the Nigerian Private Sector Coalition Against COVID-19 was created out of the urgent need to combat the COVID-19  pandemic in the country.

According to him, four major committees were set up, namely, funding, steering, operational and technical committees.

He said each member of the funding committee would contribute at least N1bn.

Emefiele said, “Information gathered so far has revealed that to procure all needed equipment, material and infrastructure needed to fight the corona pandemic, over N120bn must to be raised.

The CBN governor said an account would be set up at the CBN to receive both naira and foreign currencies from donors.

He said the steering committee would be chaired by the Secretary to the Government of the Federation, Mr Boss Mustapha, who currently chairs the Federal Government Committee on Covid-19.

“Each member of the committee is to ensure that their institution contributes at least N1bn to this effort. More members are allowed as long as they are willing to contribute at least N1bn.”

The founder of BUA Group, Abdulsamad Rabiu, announced on Thursday a donation of N1bn through the BUA Foundation to strengthen the fight against the coronavirus pandemic.

The company said in a statement that Rabiu had also placed an order for additional equipment and medical supplies including testing kits and medical protective gears, which he would donate to nine states in the country.

Rabiu was quoted as saying that the N1bn donation would be given through the Central Bank of Nigeria-led Private Sector Coalition Committee against COVID-19.

In a related development, Access Bank Plc has said it is teaming up with Africa’s richest man, Aliko Dangote, to provide treatment and isolation centres across the country.

Bloomberg quoted the bank as saying in an emailed statement on Thursday that the facilities, with a total of 1,000 beds, would be ready within weeks.

The United Bank for Africa Plc said it would donate about N5bn towards providing relief assistance to the country and 19 others across Africa to support their governments in combating the viral infection.

Rewane: No recession in view for Nigeria