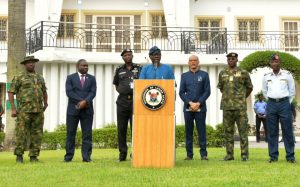 Lagos State House of Assembly has empowered Babajide Sanwo-Olu, the state governor by approving N20 billion to combat and stop the deadly coronavirus (COVID-19) pandemic in the state.

This came in passing of a bill tagged “A Bill for a Law to Combat and Stop the Spread of the Coronavirus Pandemic in Lagos State and for Connected Purpose” into Law yesterday.

The bill which passed through its First, Second and Third Readings during plenary same day, was raised as Business of the Day by the Deputy Leader, Hon. Noheem Adams as House Bill No. 8. The Bill has 25 Sections.

The essence of the Bill is to empower Mr. Governor in combating and stop the spread of the virus.

According Mudashir Obasa,  the house speaker, the sum of N20 billion was to enable the governor to take off with a view to combating the virus head on.

Obasa said the fund would enable the governor to establish other treatment centres that would enable victims receive treatment within their division of residence.

He added that volunteers and retired medical practitioners would also be recalled to assist the state.

The House, however, passed the third reading of the bill and directed Azeez Sanni, the clerk of the house, to send a clean copy to the governor for his assent.

The bill would also place a fine of N100,000 for defaulters and one month incarceration in the correctional centre or three months community service.

Where the offences were not spelt out, the fine would attract N200,000.

Hon. Richard Kasunmu, expressed optimism that the fund would enable the governor to expend the necessary fund to fight against the spread of the deadly virus.

He added that “our hospitals would gain more support in terms of equipment to fight the menace.”

The speaker, who concluded the deliberation, explained that the contingency provision in the budget “is not up to this volume.”

He said: “The governor has to start something which he has already started so as not to act outside the provision of the law”.

“The quick passage of the Bill is apt. An emergency situation demands an emergency decision.”

Lagos state has been the epicenter of COVID-19 in Nigeria with more confirmed cases which according to the National Centre for Disease Control (NCDC) increased to 65 confirmed cases as at 8:35pm on Thursday out of which one dead was recorded while three patients had recovered, putting active cases at 61 as at  the said time.