The Chinese government’s representatives in Accra, Ghana over the weekend have signed an infrastructural-assistance agreement with the Ghanaian government in the production of bauxite ore in the country for export. 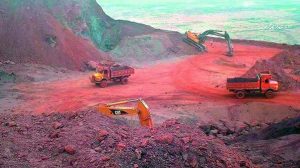 According to the vice-president of Ghana, Mahamudu Bawumia, the infrastructural-assistance deal is about $2 billion, adding that the second-largest world economy, China has already released the first tranch of payment which is $649 million and hopes that the next tranch would be released by the first quarter of 2020.

Bawumia said, “We hope that the rest will come through by March of 2020.”

As part of the agreement, the vice-president added that the China Export and Credit Insurance Corporation (Sinosure) has commenced the construction of four road projects in some parts of the country.

Also, in addition to the agreement by both countries, the Chinese government has agreed to wipe off the debt owned by Sinohydro, Ghana-owned petroleum firm which gulped about $35.7 million and a $42.7 million for infrastructural improvement in the former gold-coast country.

Business a.m. gathered that the deal from the Chinese government part of the $143 billion infrastructural loans it made to the continent from 2000 to 2017.

However, the proposed bauxite ore production in the country may spark some uproar especially from the nation’s conservationists who are challenging the move by the government saying that it may cause environmental damage on the Atewa forest, a 90 square miles preserve in southeast Ghana. But the Ghanaian president, Nana Akufo-Addo has assured that the mining activities will not incur any form of damage on the country’s forest preserve.

Also, Guinea, Africa’s leading bauxite ore producer is in the same deal with the Chinese government which has since commenced operation in 2017.

With these two giant bauxite exploration and production in the West Africa region, it could ramp up the total production of the mineral from its current 17,000 metric tonnes to a higher proportion for export.