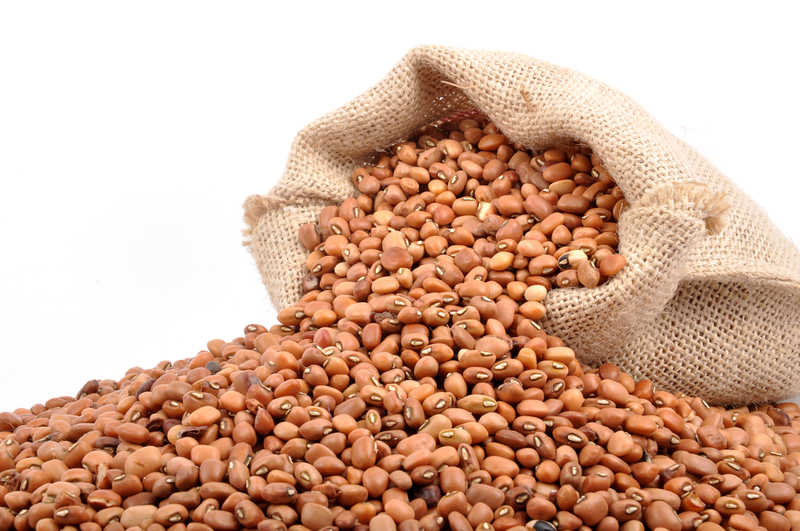 Cowpea also known as “ poor man ’s meat” due to its rich source of protein, especially for those who cannot afford proteins from animal sources such as meat or fish, is an important staple food and source of protein for millions of people in Nigeria and several parts of the world. In many Nigerian communities, asides cooking the raw seeds for consumption, cowpea is being ground and the paste is boiled or fried to produce bean cake (moimoi) or bean bun (akara).

It is known to be drought tolerant with the ability to germinate easily even under poor soil conditions making it highly adaptable to the sub-Saharan region where it is widely grown. Another remarkable factor that makes the cowpea valuable is that the leaves are edible for human and animal consumption even before the harvest of mature grain. The United Nations Food and Agriculture Organisation (UNFAO) ranks West and Central Africa as the leading cowpea producing region in the world. The international organisation noted that these regions account for 64 per cent of the estimated three million tonnes of cowpea seeds produced annually.

However, a report by the Federal Ministry of Agriculture and Rural Development (FMARD) disclosed that despite being the highest producer in the world, Nigeria imports about 500,000 tonnes of cowpea annually to meet its local demand. This is being attributed to the low yields generated by local cowpea farmers as a result of infestations by the legume borer (Maruka Vitrata), a harmful pest that devours cowpea leaves and seeds causing devastating damages to the flowering buds and seeds eventually rendering the infested crop useless.

Overtime, the use of insecticides has not proven to be a viable approach as local farmers are forced to use heavy doses of insecticides, which are most often, unaffordable to resource poor farmers. The pesticides also pose health and environmental risks, causing death, sickness, disability, killing beneficial organisms and also leaving harmful residues on crops

The search for a solution

To curtail this challenge, cowpea researchers across Nigeria, in collaboration with the African Agricultural Technology Foundation (AATF), embarked on various projects aimed at developing pest resistance cowpeas. The research involved collections of cowpeas and related species, assembled and subjected to the natural habitations of the pests. Mohammed Ishiyaku, principal investigator for the Pod Borer Resistant Cowpea Project at the Institute for Agricultural Research (IAR), Ahmadu Bello University, recounted that despite gathering about 1,500 varieties of cowpeas form various parts of the world, the development of a pest-resistant variety at the International Institute of Tropical Agriculture based in Ibadan was a futility due to the lack of any resistant breeding stock.

This discouraging result meant there were no source of natural resistance to insects in cowpea anywhere in the world and the researchers were forced to seek another alternative. The only feasible solution was the application of ‘biotechnology’, a process that involves harnessing genetic engineering in which a trans-gene from a naturally occurring bacteria in the soil (Bacillus thuringiensis) was cloned to create a pest-resistant cowpea.

The Bt gene causes the plants to produce a protein that selectively affects certain harmful pests, including the pod borer without affecting other beneficial insects. The protein is also harmless when consumed by humans and livestock. The cowpea variety named SAMPEA 20-T was developed through a partnership that involved Nigeria’s Institute for Agricultural Research (IAR), National Biotechnology Development Agency (NABDA), the Agricultural Research Council of Nigeria (ARCN), Australia’s national science agency, CSIRO, and the Danforth Plant Science Center. Bayer CropScience, an international agriculture research industry based in The Netherlands provided the Cry1Ab (Bt) gene on a royalty-free humanitarian basis to ensure the seeds are affordable to smallholder farmers. The partnership was coordinated by the African Agricultural Technology Foundation (AATF) with sustained funding by the United States Agency for International Development (USAID) and The Rockefeller Foundation.

At the conclusion of the genetic modification project, a group of Nigerian cowpea farmers were presented with the biotech cowpeas for practical field trials to demonstrate how the biotech seeds performed alongside conventional varieties on their farms and the results were recorded after a stipulated period of time. Aliyu Tsalha, one of the cowpea farmers explained that the new biotech variety is evidently different from the cowpeas he had been planting on his farm. He stated that the two varieties were planted at the same period but the former type had not matured yet while the biotech type was already mature for harvesting.

Ahiaba, another cowpea farmer observed that unlike other times when he had to spray his cowpea crops about seven to eight times a season, the new biotechnology cowpea does not require more than twice-a-season pesticide spraying and its cultivation-harvest period is earlier compared to the former crop.

On his part, Saidu Umar, who also experimented with both varieties on his farm, noted that the leaves of the biotech variety are very edible for feeding animals. Mohammed Saba, a member of the Pod Borer Resistant Project team noted that compared to the local variety planted by farmers, the transgenic variety was not affected by the early cessation of rain.

“The genetically modified cowpea tastes just the same as conventional varieties and has the same protein and nutrient content. The legume does not have any killer gene and farmers can replant the seeds if they wish,” he continued.

According to Hamzat Adamu, a technical staff for cowpea, Institute for Agricultural Research, Ahmadu Bello University, the new variety has been genetically engineered to not only provide built-in resistance to the insect, it will significantly decrease pesticide use to just two applications per cropping cycle, primarily to control other insect pests. He also revealed that the crop is resistant to striga and alectra, two parasitic weeds that contribute to yield losses.

When questioned on the adverse implication of the crop to human or animal health, Ishiyaku confirmed that it had no adverse effect whatsoever on human/ animal health or the environment. “When the pests feed on this genetically improved cowpea, the insect dies immediately making it incapable of breeding other generations of insects,” he added.

The federal government eventually approved commercialization of the pestresistant biotech cowpea on December 12, 2019, placing Nigeria as the first ever country to commercialize the genetically improved cowpea. However, the Covid-19 pandemic and the nationwide lockdown in the early months of 2020 disrupted distribution of the seeds. Only a small percentage of cowpea farmers received the biotech seeds for the 2020 planting season. The federal government has pledged to enhance an improved distribution for the next planting season.

The Open Forum on Agricultural Biotechnology (OFAB), a biotechnology facilitative and informative platform, recently disclosed that with the adoption of biotech cowpea by the federal government, Nigeria could amass as much as $638 million in six years through cowpea export. According to Rose Gidado, the organisation’s country coordinator, the figure was based on a study by Programme for Biosafety Systems (PBS) and International Food Policy Research Institute (IFPRI), under Biosafety and Biotechnology Rapid Assessment and Policy Project (BioRAPP).

Gidado also expressed optimism that the adoption of Pod-borer Resistant Cowpea (PBR) will enhance the output of farmers, thereby impacting positively on the nations’ economy. Lucy Ogbadu, chairperson of the OFAB Nigeria Programming Committee, asserted that biotechnology has been the driving force in crop productivity in developed countries such as the U.S.A, Argentina, Australia, Russia and others, resulting in bountiful harvests.

She urged the government to focus its attention in that area and ensure good funding for biotechnology in Nigeria. Ogbadu further suggested the need for more advocacy and enlightenment to ensure that the developed varieties “ are not just lying on the shelves” but are being utilised by the farmers for improved productivity. Onyaole Patience Koku, the chief operating officer of Replenish Farms, Kaduna State, said that by controlling pest infestation, the country could become self-sufficient and become a major exporter of the crop.