Godwin Emefiele, Central Bank of Nigeria’s (CBN) governor and an exponent of development activism in the operation of the apex bank,  has just be re-appointed for another term of five years by President Mohammadu Buhari. In line with the CBN Act, the president has forwarded a letter to the senate for the confirmation of Emefiele’s reappointment.

He was first appointed to the position in 2014 by former president Goodluck Jonathan, from his position as managing director of Zenith Bank Plc. 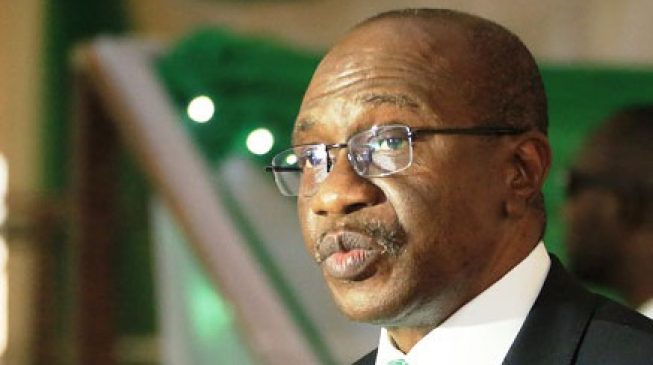 While his last two predecessors in office, namely Chukwuma Soludo and Emir Lamido Sanusi, focused their attention on financial system stability and and effective financial intermediation, Emefiele charted his own path, preferring to drive the CBN as both growth and development agent and catalyst.

In this course of action, he has led the CBN to introduce various intervention funds for the development of agriculture, SMEs, industry, infrastructure, and diversification of the nation’s economic base. Among such programmes are the N40 billion Anchors Borrowers Programme, the N220 billion MSMEs development fund,  the N300 billion Real Sector Support Fund (RSSF), and the N213 billion Nigerian Electricity Market Stabilisation Facility (NEMSF), among others.

In defending these interventions, the CBN said Emefiele chose to go into agricultural , industrial and infrastructural financing to ensure the real growth of the economy in reaction to the IMF criticsm of the CBN for its direct involvement in the economy.

“There is nothing unusual about what the CBN is doing. We agree with the IMF that one of the core functions of the central bank in any country is to maintain price stability “They said we should focus on inflation targeting, but that is just one bit of it, IMF will expect us to import food and not make arrangements to produce our own foods. The CBN is funding farmers who will grow food, supply to our people and by doing so reduce the price of food in the market,’’ the CBN said.

According to the apex bank, food was responsible for about 50 per cent of the causes of price increase in Nigeria, saying, “so what we are doing is delivering on our core function which is ensuring that there is price stability’’.

Emefiele’s central bank also said it was intervening in infrastructure because the present high cost of doing business drove up interest rate as well as other costs. The CBN director said that the bank’s strategy was already yielding positive results and millions of jobs had already been created through the provision of credit to farmers and small scale enterprises.

As news of his reappointment filtered out last week, the reactions attendant upon the development have been a mixed grill: some hail it, others not so convinced about its justification.

Uche Uwaleke, the chairman, Chartered Institute of Bankers of Nigeria, Abuja chapter, described Emefiele’s appointment as a positive development for the Nigerian economy, saying stakeholders in the economy would have confidence in the consistency of the monetary policy.

“Investors, both domestic and foreign can have some degree of confidence in the direction of monetary policy, which is positive for the capital market. One thing is now certain: that the interventions by the CBN in critical sectors of the economy especially agriculture and non-agric-based SMEs will continue.

“These will rub off positively on economic recovery efforts especially now that the CBN under Emefiele has signaled an accommodative monetary policy stance. It is equally positive for financial systems stability.

“So, I expect a positive reaction going forward, I would like to see an intensification and effective monitoring of the interventions in particular the Anchor Borrower programme.

“Emefiele should also focus on ensuring increased access to credit by SMEs and generally fostering a low interest rate environment with the support of fiscal authorities”, Uwaleke, a professor of banking and finance said.

An analyst at Ecobank Nigeria Limited, Kunle Ezun, said the reappointment will be positive for the financial system. According to him, “For the naira, I do not expect a major shift. The possibility of devaluation is nil as I don’t think there will be devaluation in his second term if approved by the Senate.

“But what I see that the central bank will continue to do is to be intervening in the market to keep the naira around N360/$ and hopefully there would be the capacity to have a single exchange rate, instead of the multiple exchange rate regime we have presently.

“On interest rate, I don’t think there will be any major shift in the monetary policy direction. In the last Monetary Policy Committee, we saw a 50 basis cut. Do I expect a further cut? Yes, but how soon? I can’t say so soon, but we expect that there would be a gradual drop in interest rate, which would be further tied to the fiscal outlook.

“Also, we expect to see more of Anchor Borrowers’ Programme and intervention to the real sector.”

However, Debo Ajayi, chairman, TAF, who is also an economist, said he had not really considered the governor to have performed well. He described some of the actions of the CBN as confusing because he got involved in fiscal policies instead of focusing on monetary policies, which was his key role.

Ajayi said, “Maybe things could have been worse than it actually is but also, I really do not see the CBN managing the economy very well, and yet, the exchange rate seems to have stabilised, but it is still not where it ought to be in terms of the valuation of the naira.

“So, I have not seen any major initiative from the CBN, but evidently, his boss may be looking at it from an angle we are not looking at it from that is making him to recommend him. However, from this side, I don’t see the governor to have done an exceptional job for which he is being recommended for another five years.

“But I do commend them from time to time for some of the initiatives. For instance, the recent one on access to credit in the creative industry is a fantastic one, better late than never. We see some initiatives sometimes like in the area of agriculture, but we have not seen these translate to tangible impact on the masses.”

A professor of economics at the Olabisi Onabanjo University, Ago Iwoye, Sheriffdeen Tella, said President Muhammadu Buhari re-appointed Emefiele because he felt that he had been able to maintain stable exchange rate and ensured that the inflation rate did not go haywire.

The don, who, however, expressed reservations about the CBN’s direct intervention in the agricultural and the real sectors, added that Emefiele must have earned his re-appointment having been able to help the Buhari’s administration to stabilise the nation’s monetary policy, as it had envisaged it to be.

He said, “I think the President re-appointed him because he is happy with what he has done in the monetary sector. He has stabilised the foreign exchange rate and managed the inflation rate. These must have fallen in line with the President’s policy, but I don’t believe the CBN should be directly involved in giving loans to    farmers and those in the real sector of the economy.”

The weeks and months ahead may very well unveil a new thinking and new direction from what is on ground now. Whatever the new thinking is, we do hope it is all for the improvement of the financial system and the  well being of the economy