THE PREVAILING UNFRIENDLY relationship between Governor Abdullahi Umar Ganduje, and the Emir of Kano, Muhammadu Sanusi, has the potential of jeopardizing efforts to attract new investment to the state, investment experts have warned. 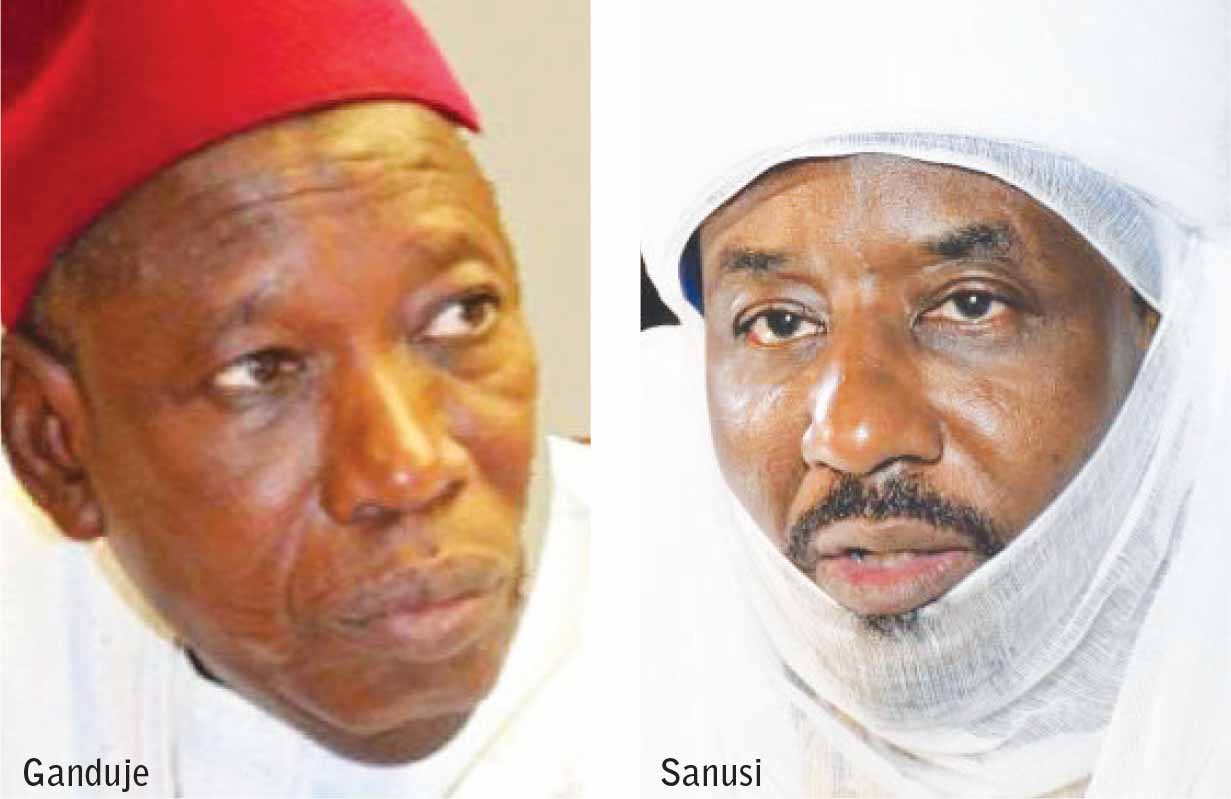 Governor Ganduje, who is expected to assume a new four-year mandate he got in the last election, on May 29th, has identified investment mobilization as one of the key economic agenda of his new administration.
One of the major achievements recorded in the out-going tenure, which expires next week, is the establishment of Kano State Investment Promotion Commission (KIPC), under the chairmanship of the embattled traditional ruler.
As a way of realizing the core objective of the commission, which is to boost the state share of local and foreign investment, Ganduje and Sanusi have jointly and individually crisscrossed several countries selling the numerous investment opportunities available in the state.
The governor recently participated in the 8th Annual Investment Meeting (AIM) in Dubai, United Arab Emirate (UAE), where he made a lead presentation geared at marketing investment opportunities in Kano to investors from the country, and other Middle East countries.
Investment experts are of the view that the on-going face-off between the two leaders is going to serve as a huge distraction to the quest by the state to attract new investment.
In the recent times, Governor Ganduje has been hell-bent on cutting Emir Sanusi to size over his alleged support for the People’s DemNEWS ocratic Party (PDP) governorship candidate, Abba Kabiru Yusuf, in the last general election.
Facts available to business a.m. shows that the governor is even considering a worst case scenario, which is to dethrone the Emir, after the silent move to have him transferred to Bichi, one of the new emirates he created, failed.
The sources who have full knowledge of the crisis between the governor and the emir believe on-going investigation of the emirate’s accounts by the Kano State Anti-Corruption Agency over alleged embezzlement of the Emirate Council fund by the emir, is a plot aimed at achieving the objective of getting him dethroned.
There are fears that the anti-corruption agency is going to declare a guilty verdict against the emir, which will give way for the governor to move for his dethronement or ask for him to resign.
Investment experts view this move as grave to the bid by Kano State to attract new investments, as well as put on hold some of the new investment plans, which many foreign investors have on the table for the state
The on-going move to dethrone the emir is based on the claim that he supported the People’s Democratic Party’s governorship candidate, Abba Kabiru Yusuf in the recently conducted general elections.
As a way of getting back at the emir, the governor on Monday 6th May, was speculated in some quarters as having a hand in the petition submitted to the Kano State House of Assembly by one Ibrahim Salisu, seeking the de-centralization of the Kano Emirate, and the petitioner had also demanded the upgrade of the traditional rulers of Karaye, Bichi, Rano, and Gaya to the status of first class emirs and the creation of additional emirates in Kano.
Based on the petition the Assembly, which was earlier on recess until early June, was hurriedly and immediately reconvened by the Speaker, and it went ahead to set up a committee to look into the petition and the committee came up with a report the following day, Tuesday 7th May.
In the report, the House Committee granted all the prayers of the petitioner, and constituted another Committee to draft Amendment Bill to ensure the creation of the new emirates.
By the end of the week, despite a subsisting court order granted by a High Court sitting in Ungogo, the new emirs were appointed and issued their letters and instruments of authority.
By this action, Kano seems to have lost its prime status as one of only two states in Nigeria with one centralized emirate or traditional council, the same as Sokoto, which is the seat of the Sultan of Sokoto.
In the same vein, the law removed 36 of Kano’s 44 local government areas from the Kano Emirate to create the four new emirates – Rano, Gaya, Karaye and Bichi. Rano Emirate covers 10 local government councils – These are Rano, Bunkure, Kibiya, Takai, Sumaila, Kura, Doguwa, Tudunwada, Kiru and Bebeji.
Also the Gaya Emirate has nine local government counciling of Gaya, Ajingi, Albasu, Wudil, Garko, Warawa, Dawakin-kudu, Gabasawa and Gezawa, while the Karaye Emirate has eight local government councils – Karaye, Rogo, Gwarzo, Kabo, Rimingado, Shanono, Madobi and Garun-Malam. Bichi Emirate has nine local government areas – Bichi, Bagwai, Tsanyawa, Shanono, Kunchi, Dambatta, Makoda, Dawakin-Tofa, and Tofa Some legal experts are of the view that the creation of the new emirates was done in violation of standing regulations of the House, which does not act on the basis of a petition sent in by an outsider, but in this instance the rule was disregarded.
The minority leader of the House, who is from Peoples’ Democratic Party approached the Court on Friday 10th May. The court immediately issued an order restraining the Governor from appointing the new emirs or otherwise implementing the law.
The order was served by the Court Bailiff at the Government House on Friday, 10th May at about 5.00pm, but Ganduje disregarded the court order and proceeded. The government claimed that the appointments had been carried out.
Meanwhile, the actions of the governor has completely overturned hierarchies and relations within the emirate affecting the Emir of Kano and the four kingmakers – Madaki, Makama, Sarkin Dawakin Mai Tuta and Sarkin Bai on the one hand, and the so-called new emirs and this situation could lead to a breakdown of law and order in the state.