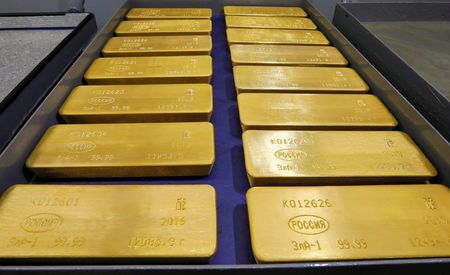 Gold will average $1,322 an ounce this year and $1,369 in 2020, the median forecasts returned by the poll of 34 analysts and traders showed.
The forecasts were higher than those from a similar poll three months ago which saw averages of $1,305 this year and $1,350 in 2020.
Gold prices have slipped in recent weeks to around $1,280, under pressure from a stronger dollar, which makes bullion more expensive for buyers with other currencies, and rising stock markets which offer investors better returns.
Helping push gold lower, investors have taken money out of gold-backed exchange-traded funds and ramped up bets on lower prices on the Comex exchange, which now outnumber wagers on higher prices.
But analysts said slowing global economic growth, the increasing likelihood of stock market corrections, a pause in interest rate rises and a likely weakening of the dollar would bring money back to the metal.
Gold is traditionally seen as a safe place to invest during times of uncertainty, as it tends to retain its value while other assets slide.
“We expect falling risk appetite and a surge in safe-haven demand to be the key factor driving both gold and silver prices,” said Capital Economics analyst Ross Strachan.
Higher interest rates are bad for gold because they raise bond yields, making non-yielding bullion less attractive to investors.
A Reuters poll of 70 currency strategists showed they expected the U.S. dollar, which in April reached its strongest in almost two years, to slip over the coming year.
The gold forecast for this year is 4 percent higher than last year’s average price of $1,268 and would be the highest average since 2013.
But it suggests gold will struggle to break convincingly above recent peaks of $1,374.91 hit in 2016 and $1,366.07 last year – which together form strong technical resistance.
“We need a strong impetus to break that resistance,” said LBBW analyst Frank Schallenberger.
“(But) with central banks buying more and more gold … interest rates staying low and economic perspectives looking dull, gold will eventually go up,” he said.
For silver, poll respondents forecast an average price of $16.05 an ounce this year, up from $16 in the poll three months ago, and $17 in 2020, down from $17.20 in the previous poll.
Silver is used in industrial applications such as solar panels and electronics as well as for investment and jewelry, so slower global economic growth could depress demand and drag on prices.