A total of 95,229 metric tonnes of goods were exported with freight on board (FOB) value of $46.6 million (about N14.2 billion) at Apapa Port, in the first half of 2019 with most  of the exports being agricultural and mineral products. 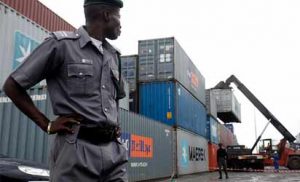 The Nigeria Customs Service unit operating in Apapa Port, Lagos also  says it has collected a total of N203.26 billion in the first half of the year.

Comparative analysis of the revenue collection of the command between January – June 2018 and 2019 indicates an increase of N26.5 billion from N176.75 billion generated within the corresponding period of 2018.

Abba-Kura attributed the success achieved by the command to the strict adherence to professionalism through sensitization of officers as to their responsibilities and working in line with the standard operational procedures for optimal revenue collection.

He added that periodic stakeholders’ engagements, open door policy, prompt resolution of disputes by the Dispute Resolution Committee as well as maintaining right synergy and collaboration with other sister agencies also contributed to the command’s increased revenue profile .

On export, the controller disclosed that the command also achieved high level of compliance on export declaration  stating that the command recorded a total of 95,229 metric tons of exported with FOB value of $46.6 million, (about N14.2 billion). most of them of the exported items were agricultural and mineral products.

The Apapa Port Customs boss also spoke on smuggling saying, “Within the period under review, the command seized a total of twenty -nine containers of various items that contravened import procedures. These items include Tomato Paste, vegetable oil, ladies and girls fashion footwear, Tramadol and other drugs. It also includes Armoured Glasses without End User Certificate and drilling pipes labelled in foreign language.

“All the listed items have breached the Federal Government Fiscal Policy Measures for 2018/2019. The Duty Paid Value (DPV) of these items stood at ra (N418.4 million”

He assured that the command would facilitate speedily legitimate, compliant and all trade that have satisfied the necessary procedures concerning the transaction adding that all sch consignments would get accelerated clearance out of the customs system.