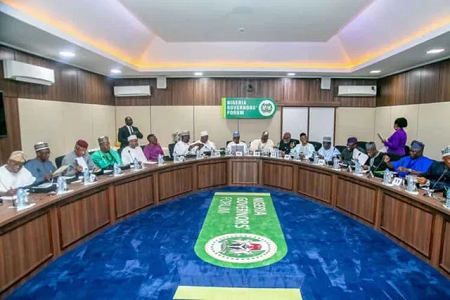 Ripples of the executive order 10 by President Muhammadu Buhari authorising financial autonomy for the state judiciary and legislature continued as the 36 states governors of the federation after their meeting Wednesday, resolved to engage Abubakar Malami, the minister of justice and attorney general of the federation, on the implications of the order.

This was one of the highpoints of the communique of the 9th teleconference of the governors under the auspices of the Nigeria Governors’ Forum (NGF).

In the communique of their meeting signed by the chairman of the forum, governor Kayode Fayemi, said,
“Through the NGF Legal Committee comprising the Governors of Sokoto, Plateau and Ondo, engage with the Attorney General of the Federation to reflect on the implications of the recently passed Executive Order 10, 2020 on governance at the Sub-National level”.

In the executive order 10, President Buhari directed that all money of the states judiciary and legislature be deducted from the federation account as a first line charge

Briefing State House correspondents after signing the bulls. the President’s Senior Special Assistant on National Assembly Matters (Senate as he then was ), Ita Enang, had said the new law grants financial autonomy and independence to Houses of Assembly and judiciary in the states.

The communique said other issues discussed at Wednesday’s meeting of the governors include deliberation on the COVID-19 pandemic in the country.

According to the communique of the meeting, the NGF chairman, Kayide Fayemi, briefed State Governors on coordination activities with the Presidential Task Force on COVID-19, multilateral and bilateral partners, and the private sector through the Coalition against COVID-19 (CACOVID) that are targeted at improving the COVID-19 response of state governments.

The chairman of the forum further said, “We received brief from Ebrima Faal, senior director of the African Development Bank (AfDB) Nigeria on the $1billion COVID-19 crisis facility and update from Zouera Youssoufou, managing director and CEO of The Aliko Dangote Foundation on activities of the CACOVID.

He said that the Nigeria Governors’ Forum thereafter resolved to “Interface with the Ministry of Finance, Budget and National Planning, on the $1 billion COVID-19 crisis facility approved for the country at the request of the Federal Government by the African Development Bank (AfDB), to embark on the delivery of projects that will meet the needs of Nigerians during this period, in such areas as health emergency assistance, agriculture and food security”

He said the meeting resolved to continue engagements with CACOVID to consolidate interventions on the distribution of palliatives to vulnerable Nigerians who had lost their means of livelihood as a result of the coronavirus pandemic.

The governors also resolved to endorse the development of a 3-month plan on reopening the economy by the NEC Sub-Committee that will interface with the Presidential Task Force on COVID-19 comprising the Governors of Delta (Chairman), Ekiti, Lagos, Anambra, Kano, Bauchi, Plateau and the FCT Minister;

Fayemi said that the governors through The NEC Ad-Hoc Sub-Committee on COVID-19 comprising the Governors of Kaduna (Chairman), Kebbi, Ebonyi, Ogun, Nasarawa, Edo, and Jigawa, will interface with the Economic Sustainability Committee chaired by the Vice President, Prof Yemi Osinbajo, to incorporate the contributions of state governments in the Economic Sustainability Plan as a national response to the COVID-19 crisis.