The need for Nigeria to develop the gum Arabic value chain, especially considering the need for revenue from the export of profitable commodities has been brought to fore by the House of Representatives which is making moves to maximise the utilisation and economic potential of the commodity as part of the government’s plan towards sustained economic diversification.

The legislative arm of the government recently  passed a bill for second reading, sponsored by Mohammed Tahir Monguno, titled “A Bill for an Act to Establish Gum Arabic Research Institute; and for Related Matters”.

Monguno described gum Arabica as a natural gum originally constituting of the hardened sap of two species of acacia tree, adding that it is also an edible, dried gummy exudate from the tree of Acacia Seyal.

The lawmaker representing Marte-Monguno-Nganzai Federal Constituency of Borno State,further pointed out that gum arabic is a high source of revenue, as could be seen in other countries such as Sudan,maintaining that the establishment of the institute will ensure the coordination of the exploitation, development and exportation of gum arabic products.

Highlighting the unique qualities of gum arabica, Monguno said it is highly valued as an emulsifier and a thickening agent in icing, filling, chewing gum and other confectionery treats.

“The importance of harnessing the potential of gum Arabic cannot be over-emphasised as gum Arabic is harnessed in my state, which is from Yobe State, down to Sokoto State and therefore has a large coverage,” he said.

The bill was thereafter, voted on, approved for second reading and referred to the Committee of the Whole for further proceedings. 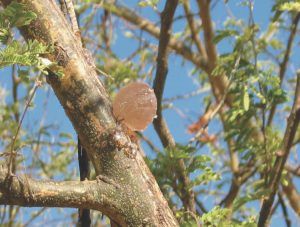 Gum arabic, also known as acacia gum, is a natural gum derived from hardened sap obtained from two species of the acacia tree (Senegalia senegal) and Vachellia (Acacia) seyal). It is regarded as a versatile emulsifier that is used as a thickening, binding and stabilising material across several end-user industries including food & beverages, pharmaceuticals, textiles, cosmetics,ceramics, inks, paper, ceramics, paints,adhesives among others.  Renowned for its ability to ensure even distribution of sugar in liquid, the gum is one of the major emulsifiers used in the production of syrups for soft drinks, including Coca-Cola and Pepsi.

In the healthcare sector,the gum is used in various pharmaceutical formulations for holding the ingredients together in the drug. In addition, it contains medicinal properties and can be consumed with water to treat stomach problems as it is rich in dietary fiber.It is also used as a laxative and helps in reducing cholesterol levels in patients.

A gum Arabic report by the United Nations Conference on Trade and Development (UNCTAD) titled “The Economics of Gum Arabic in Africa” noted that the major producing and exporting countries in the world are located in Africa and include; Chad, Eritrea,Kenya,Mali, Nigeria,Senegal,Sudan and Tanzania, while it is produced in smaller quantities in South Asia and the Arabian Peninsula.

In Nigeria, market data shows that the drought-resistant arabica tree from which the gum is sourced,thrives best in the arid zones, particularly the northern region and major producing  states include; Adamawa,Bauchi,Borno,Gombe,Jigawa,Katsina,Kebbi,Nasarawa, Niger, Plateau, Sokoto,Taraba, Taraba,Yobe and Zamfara.  Meanwhile, top producers Borno and Yobe states account for about 80 per cent of an estimated 2.5 million hectares of land in which the gum tree is grown.

According to Market Research Future, a leading provider of market research reports, the gum arabic market, buoyed by high demand across global industries, is estimated to hit over $1.653 billion by the end of 2030. The report also projects that  the market will thrive at a compound annual growth rate (CAGR) of over 6.78% during the review period.

Also, a report by Future Market Insights, one of the leading providers of custom and syndicated market research data, showed that the global gum Arabic market demand was valued at around $897.3 million in 2022. It forecast a  valuation of  $ 1.7 billion between 2022 to 2032 at a CAGR of 7.2 per cent.

Highlighting the economic benefits of the commodity, UNCTAD, in a report titled “commodities at a Glance”, noted that gum arabic is a promising commodity for producing countries due to its potential to generate foreign exchange, promote sustainable agriculture and forestry, and combat desertification and climate change.

An economic analysis of gum arabic production in Yobe State conducted by researchers of the department of Forestry and Wildlife management, Federal University Dutse (FUD),  Jigawa State, showed that gum arabic production was highly profitable in Yobe state and it can be produced at commercial scale to diversify the state’s economy and to counteract the excesses of desertification.

Though Nigeria is ranked among the leading producers and exporters of arabica gum with annual output estimated at 22,000 tonnes, market analysts observed that the country’s output does not reflect its factual potential. They identified factors such as quality inconsistency, poor market organisation and production disruptions due to the spate of insecurity in the northern region as a major hindrance to the country’s gum arabic sector.

It was also noted that the activities of the insurgents, particularly in Borno, a leading producing state, led to a sharp decline in Nigeria’s production and caused Nigeria to drop from second largest producing country to fourth position.

Bernard Okwutie,an agriculturist,explained that a bulk of the gum arabica produced in Nigeria is abundant in Sambisa forest and some other dangerous zones where the insurgents are located.

“Sambisa forest is virtually gum arabic. Right now,farmers can’t go to Sambisa or all these dangerous places to harvest gum arabic. This is why we are insisting on organised planting,” he said.

Mario Jales, economist at UNCTAD’s Commodities Branch,bemoaned that many African countries including Nigeria, export crude gum arabic at low prices and re-import the processed gum at substantially higher prices to meet local manufacturing demand. This, he noted, is due to poor investments in processing of the raw gum into finished products,placing local producers at a disadvantaged position in the global market.

Dwelling on this, Mustapha Shehuri, minister of state, Agriculture and Rural Development, said Nigeria exports over 95 per cent of its gum arabic in raw form to Europe, Asia and United States of America, while only five per cent is utilised locally.

He added that focusing solely on exporting the commodity at the detriment of local processing and value addition causes the country to lose about $215 million dollars annually in form of revenue and employment opportunities for local investors.

According to the minister of state for Agriculture and Rural Development, increasing Nigeria’s gum arabic production from its current status of about 23,040 metric tonnes by 20 per cent will create about 500,000 jobs estimated at $43 million additional income. This can however be achieved through implementation of sustainable and innovative  measures and also, tackling the insecurity issues in the NorthEast region where the crop grows abundantly.

Commenting on how Nigeria can improve gum arabic production, Alex Akpa emphasised an increased adoption of biotechnology to encourage mass production for Nigerian farmers. He also called for more research and increased implementation of biotechnology using tissue culture techniques and other inventive methods to produce thousands of seedlings and develop new varieties for improved quality and mass production of the commodity.

Market analysts also stated that the Federal Ministry of Agriculture needs to be more proactive in its approach towards gum arabic production in the country particularly in the aspects of engaging more farmers and facilitating Public Private Partnerships (PPPs); granting access to funds, providing modern farming implements for farmers at subsidised rates; empowerment of research institutes; and implementation of intensive empowerment programmes,marketing strategies and reforms in the sector.

Gimba Gwayo, a gum arabic farmer emphasised the need for greater awareness on the economic potentialities of gum arabic production to stimulate high participation of individuals, particularly the youths who make up a large percentage of the country’s populace.  He also pointed out that the existing land use act needs total and comprehensive review to ease land acquisition process,particularly for commercial production.