Goldman Sachs Group Inc. is acknowledging that it’s getting harder for institutional investors to ignore the cryptocurrency market with total assets ballooning to $120 billion and Bitcoin soaring more than 200 percent this year.

“Whether or not you believe in the merit of investing in cryptocurrencies (you know who you are), real dollars are at work here and warrant watching,” analysts including Robert Boroujerdi and Jessica Binder Graham wrote in a Q&A sent to clients. 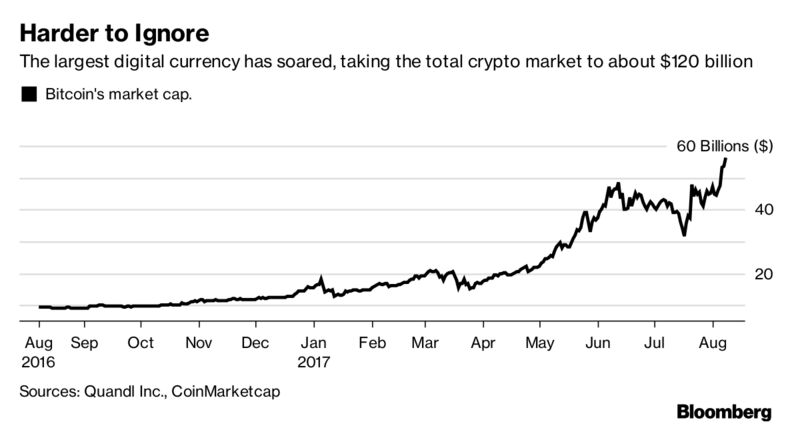 The debate has shifted from the legitimacy of the “fiat of the Internet” to how fast new entrants are raising funds, with initial coin offerings and fundraising that now exceeds Internet angel and seed investing. These are some of the questions the Goldman Sachs analysts answered:

How to trade cryptocurrencies in the U.S.?

Digital exchanges and block trades, and options will be coming soon. While individual investors can trade virtual coins on various online exchanges, institutional traders have largely stayed out of the cryptocurrency market due to its relatively small size, the structure of mandates and volatility. But block trading exists to facilitate the execution of larger orders. In addition, Bitcoin options exist and are traded on offshore exchanges, and could be traded in the U.S. by the end of the year.

Are cryptocurrencies a currency or a commodity?

Coins have attributes of a currency, as they’re presented and trusted by some medium of exchange, and of a commodity, as they’re a limited resource. The classification of cryptocurrencies varies by country, government and even application. In the U.S., the Internal Revenue Service has ruled that virtual currency does not have legal tender status in any jurisdiction. For tax purposes, the IRS treats virtual currency as property.

A platform first, and a cryptocurrency second. Unlike bitcoin, which is designed to be an alternative to “real money,” Ethereum is more of a platform set up to run any decentralized application and automatically execute “smart contracts” when certain conditions are met. Ethereum offers a digital currency called ether, but this is just one component of its smart contract execution and primarily used to facilitate and reward using the network. The rise of ethereum has not come without setbacks, including the $60 million hack of a venture capital-like organization called “The DAO.”

What is an Initial Coin Offering (ICO)?

A fundraiser through token sales. The amount of money funding ICOs has grown exponentially and the speed at which cash is raised with often little more than a white paper and Internet browser has sounded the alarm bells from parties including the Securities and Exchange Commission and the People’s Bank of China. According to Coin Schedule, ICOs have raised $1.25 billion this year, outpacing global angel and seed stage Internet venture capital funding in recent months.

What the Goldman strategists didn’t address is whether institutional investors should be buying cryptocurrencies or not.