Instacart, Shipt, and other grocery-shopping services had been around for years without anyone giving much thought to the poorly paid gig worker zipping around the store to fill carts and deliver orders.

That changed when the COVID-19 pandemic hit in early 2020. Suddenly reliant on these surrogate shoppers to take on the risk of virus exposure, Americans hailed them as frontline heroes. Within the first three months of the pandemic, nearly 200 laudatory news articles were published, and social media was flooded with grateful posts and pictures. The adulation flattered Instacart worker Gerald Timothee, who told The New York Times, “It’s all about us right now. We are holding this city together. I feel like a hero.” 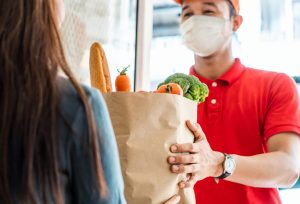 But not every grocery delivery worker felt the same. In her latest paper, Wharton management professor Lindsey Cameron examines three different ways Instacart workers reacted to the abrupt veneration and the consequences on their job performance within the weak organizational structure of an online platform.

“This work builds on what we know about self-narratives and how workers construct them in the gig economy,” said Cameron, whose research focuses on the modern workplace.

The paper, titled “Heroes from Above but Not (Always) from Within? Gig Workers’ Reactions to the Sudden Moralization of Their Work,” is the latest in a series of studies Cameron has conducted on the gig economy. It was co-authored by Curtis K. Chan, management and organization professor at Boston College’s Carroll School of Management, and Michel Anteby, management and organizations professor at Boston University’s Questrom School of Management.

Cameron said the paper is part of her ongoing “pandemic project,” inspired by how the pandemic changed the workplace and the perception of gig workers. During COVID-19 restrictions, she would walk around her Philadelphia neighborhood and notice signs thanking essential workers for being frontline heroes. Nurses, teachers, and firefighters have always fallen into that category, but never the grocery deliverer. The reputational change piqued her interest.

“That was something workers had a lot to say about. In qualitative research, that’s how you know when you’re onto something important — when people tell you what the research is about,” she said. “The pandemic ushered in a change in how people shop and a huge spike in gig workers. It’s a snapshot of what’s happening in the larger labor market.”

The study relied in part on two rounds of interviews with 44 Instacart workers, first during the height of the pandemic and six months later, when the hero narrative had died down in public discourse. From these coded interviews and additional data, the scholars identified three types of workers:

These shoppers readily embraced the hero narrative, skipping over the trials and tribulations in the typical hero’s journey and taking an uncritical view of their work as worthy.

Interestingly, Skippers didn’t go the extra mile for customers because their normal duties and exposure risk were enough to make them feel morally credentialed. In other words, because they already felt like they were heroes, they didn’t go above and beyond in their jobs. They saw their customers as highly deserving — overwhelmed working moms, elderly shut-ins, and immunocompromised patients — and any tips, thank-you notes, or other tokens of appreciation justified their belief they were heroes.

Skippers generally had a very positive view of Instacart and saw the platform as responsible and responsive. But they also had low commitment. The study noted that a year into the “new normal” of the pandemic, no Skippers were still active on the Instacart app. Cameron said that’s largely because Skippers were not economically dependent on gig work for survival, with many picking it up as a side hustle or a way to be helpful during the pandemic. As a consequence, it was easier for them to let go once the heroic feelings abated.

“The Skippers don’t have the same financial pressures as the other workers,” she said. “They’re not hurting for money. They still have their other jobs, for the most part.”

These shoppers shrugged off the hero label, viewing their work as transactional and necessary to their livelihood. They did not believe shopping for others had any moral worth, so they flatly rejected the public’s idolization.

Stallers had a negative view of Instacart, which they saw as exploitative and manipulative. Many of them mocked the company’s “Household Heroes” marketing campaign, which Instacart launched in response to the positive public sentiment. As one shopper told the professors, the hero label “really irritates me because they’re saying it to make themselves look good but aren’t giving us any kind of hazard pay…. The people at the top plan to sit back and [make] cash off of the pandemic for the rest of their lives, while some of us don’t make it past this year.”

While some Skippers made a game of their work inside the supermarkets, Stallers saw it as a pressured-filled race against the clock. They described customers as impatient, unappreciative, and entitled, saying most were healthy enough to go out and get their own groceries. Despite their displeasure, Stallers stayed on the platform beyond the worst of the pandemic, as long as the pay was enough to meet their needs.

“When money is at play and you need the money, it’s harder to have these rose-colored glasses,” Cameron said. “Many Stallers had this short-term work history, so you could argue that they are used to the more transactional nature of work and having customers who are not kind. I think there is something about their career biography that let them see the work in a more questioning and critical light.”

As an example, she described one Instacart worker who had been a ticket scalper — dangerous work that likely hardened him against any romantic notions about grocery shopping for others.

“Stallers had a wall up to any moralization that was coming from Instacart,” she said.

As the name implies, Strugglers wrestled with the hero label and needed to reconcile the banal task of grocery shopping with the idea that they were doing morally credentialed work. They hesitated to call themselves heroes compared with doctors and nurses, and they were uneasy about getting paid. As a result, Strugglers often went above and beyond for customers in order to feel that they earned the hero label, like checking other stores for desired products or keeping a stash of toilet paper in their car to offer customers who couldn’t find any when there was a shortage.

Strugglers had a mixed view of Instacart and of their customers, and that view generally worsened over time. Like Stallers, Strugglers needed the work. Many had been laid off or furloughed from other jobs during lockdowns, were college students, or were in between jobs. A shopper named Eliza said, “I’m doing this because I can get some extra money, and I don’t think that’s selfless at all…. I feel guilty because I’m making a profit out of the pandemic. I would say I’m not really doing it for the right reasons, if I’m going to be honest.”

Cameron noted that Strugglers were the only study participants who gave the researchers pictures of thank-you notes and other accolades, mementos they had collected perhaps in an effort to justify their heroism.

“Being in this gray zone makes you have to decide, ‘What is my place? Can I earn this label of being a hero? They aren’t seeing this as black or white,” she said. “You could argue this is the type of worker that Instacart wants because they are going out of their way. These are the ideal employees because they had to prove themselves again and again, day after day.”

The study focuses on the experiences of individual workers, but there are also implications for business. Instacart smartly seized on the hero sentiment with a marketing campaign and a push to rapidly expand the number of workers on the platform. But when the hero hubbub subsided, Instacart found it harder to hold on to those workers. The platform didn’t adapt to their needs, instead refocusing on the acquisition of more workers and customers.

According to the paper, Instacart’s experience shows how the sudden moralization of work, which is often used to control workers, can backfire. Rather than unifying low-wage workers, a narrative that is pushed by the public and a company can polarize and isolate workers, especially those who lack the cohesive social structure that comes with being in a physical office with co-workers.

The study also deepens knowledge about how gig workers define themselves and relate to their work in a fragmented space. There is a psychological “balancing act” between the schedule flexibility and autonomy offered by gig work and its dehumanizing technology, inconsistent wages, and potentially poor working conditions, according to the paper. Sudden moralization adds another dimension to that self-narrative, which workers respond to differently.

“Not all heroes wear capes, as Instacart officials, media, and customers claim. But telling workers they have capes does not necessarily make them heroes,” the professors wrote. “Instead, workers must wrestle with moralized narratives, making them their own, to truly embody the narrative of being a hero.”