Hong Kong’s main share index surged more than 4 percent on Wednesday, ahead of the government’s formal withdrawal of the proposed extradition bill that sparked three months of protests in the former British colony.

According to reports, Carrie Lam, Hong Kong chief executive later announced the formal withdrawal of the bill at a meeting after markets closed. The move, sources say, would meet one of the protesters’ key demands.

The Hang Seng closed at its highest in a month at 26,523.23 points, having rallied over 4 percent at one point, outpacing the 1.6 percent gains in MSCI’s index of Asia-Pacific shares ex-Japan .MIAPJ0000PUS and 0.9 percent rise in Shanghai shares .

Flag carrier Cathay Pacific which has been caught in the crossfire between Chinese authorities and protesters in Hong Kong, rallied more than 7 percent. 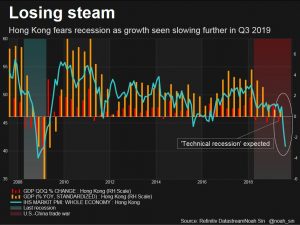 “There are people covering their short positions and bargain hunting on local blue chips,” said Alex Wang, director at Ample Finance Group, as investors hope the formal withdrawal of the bill “will calm down the situation in the society.”

The protests against the bill, that would have allowed extraditions to mainland China, began in March but snowballed in June and have since evolved into a push for greater democracy.

It was not immediately clear if the announcement of the bill’s withdrawal would help end the unrest. The initial reaction appeared sceptical and muted and the real gauge will be how many people take to the streets.

Dogged by escalations in local protests and the U.S.-China trade war, the Hang Seng lost 7.4 percent in August.

The double whammy has dampened business activity and dragged property prices in Hong Kong, one of the most expensive real estate markets in the world.