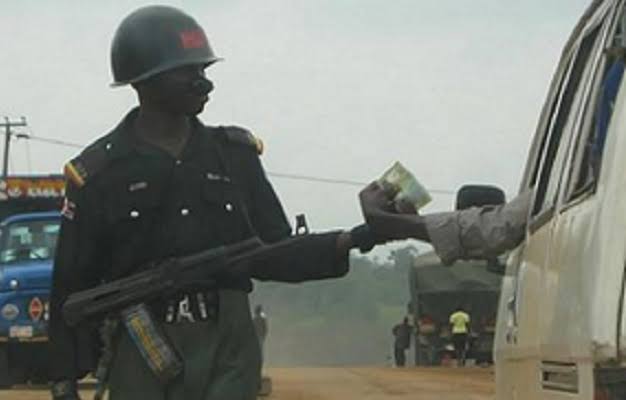 Bribe collections by the police and army officers on the road is a major reason the cost of food is rising daily and hitting the roof in Nigerian cities.

Interstate movement restrictions imposed by the Federal Government and implemented by the states to control the spread of the Covid-19 pandemic using the police and army officers have become a money spinning business for the security agents.

Business a.m monitored the development to and fro Lagos and Onitsha in Anambra State and recorded a total of 86 checkpoints mounted by the Police and Army officers, who collect N500 or N1000 from drivers.

Most vehicles moving across states during the lockdown are conveying essential commodities, mostly foods but the drivers are not allowed to cross any of the checkpoints positioned at an average of 10 minutes drive from Ogun State to Anambra State without paying N500 to security officers. Those mounted at state boundaries collect N1000, or N2000 depending on the nature or weight of the produce.

At some checkpoints, the soldiers would use indigenes to collect the bribes from drivers.

Going to Onitsha from Lagos, our correspondent joined a luxurious bus owned by a popular mass transit service company, Ezenwata Transport, laden with medical and other cargoes from Lagos. The bus was finally grounded by operatives of the Nigerian Customs Service at Ovie-Ogie, a town before the Benin bypass. The bus had spent 10 hours from Lagos to Benin, between 8am and 6pm on Sunday June 7, when it was grounded. This journey would have taken five hours, but journey time doubled due to the multiple checkpoints by security officials who always demanded N500 from the driver without bothering to care about the nature of the cargo in the bus. It was like a war time.

Our correspondent continued the journey to Onitsha the next day, Monday June 8 by joining a bus loaded with garri, a popular staple food in Nigeria. The vehicle passed through Benin City without any checkpoint, but once on the Benin-Onitsha expressway, the checkpoints were laid like bursts of ambush. There were 12 checkpoints from Benin to Onitsha and the driver paid through every checkpoint. The owner of the product, an Igbo trader who identified himself as Ugochukwu, said he was moving the garri to Owerri.

“From Onitsha to Owerri, we expect to be paying at least N1,000 at every checkpoint and in that side, the checkpoints are closer, around just five minutes drive,” he lamented.

He continued, “This money we pay to police and army officers on the road is the main reason food is now very costly. The drivers are charging very high amount because they pay so much money to security officials on the road.

“Before this interstate movement restriction, a bucket of garri was N400, but now we have to sell for as high as N1000 to cover for cost of transportation which became so high due to the bribes collected by security operatives from drivers. Actually, before I went to market this time, a bucket of garri was sold for N1000, but with what we are paying to all these police and army officers on the road, I’m already thinking of selling at N1200 to break even.”

Returning from Onitsha to Lagos, the story is the same. Our correspondent joined another bus carrying fresh pepper and okra and the checkpoint began immediately after Asaba. From there to Sagamu, our correspondent counted 38 checkpoints mounted by the Police and soldiers, helped by the locals.

Sometimes, Emmanuel John, the driver, would refuse to give them any money and he was delayed for nearly half an hour.

At a checkpoint after Ore, John refused to give the police officers money, insisting that since he was carrying food produce, he was not affected by the interstate movement restrictions. But the policemen ordered him to park and he was held for 23 minutes before he decided to give them N500 following complaints by the trader that the produce were getting weak.

At a checkpoint near Ijebu-Ode, the driver offered the officers N200, complaining that he had exhausted the money with him, but the officer pulled the trigger, stood battle-ready and ordered him to park. The owner of the good, however, gave the driver N500 to give to the officer.

“Between Onitsha and Sagamu, I have given out N20,000 to the security officials. We have also spent nine hours instead of about five hours normally used on this journey,” John lamented.

Gloria Iseh, the trader told business a.m that the price of pepper, tomatoes and other vegetables sourced from far places to Lagos have tripped due to cost of moving the goods during this lockdown.

“To me, this lockdown on the roads does not make sense. The government has only created business for security officers while the citizens bear the brunt by paying more for food in the market.

“The experience from Onitsha to Lagos is the same on all the roads. Sometimes I go to Oyo to buy food produce and you would see checkpoints everywhere at very short distances from each other, all of them collecting at least N500. The Federal Government must review this interstate restriction because it is really not restricting anyone, but just creating an avenue for security officials to collect bribe from motorists,” she said.