As part of efforts aimed at boosting liquidity and fostering the resilience and stability of the global economy, the board of governors of the International Monetary Fund (IMF) has approved the general allocation of Special Drawing Rights (SDRs) to the tune of $650 billion. This was disclosed by the Fund, which stated that the SDR will particularly help most vulnerable countries struggling with the pandemic crisis. 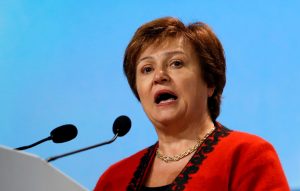 Kristalina Georgieva, managing director of the IMF, said of the board’s approval: “This is a historic decision – the largest SDR allocation in the history of the IMF and a shot in the arm for the global economy at a time of unprecedented crisis. The SDR allocation will benefit all members, address the long-term global need for reserves, build confidence and foster the resilience and stability of the global economy.”

Georgieva also said the SDR “will particularly help our most vulnerable countries struggling to cope with the impact of the COVID-19 crisis.”
The IMF further revealed that the general allocation will become effective from August 23, 2021, as the newly created SDRs will be credited to IMF member countries in proportion to their existing quotas.
Meanwhile, about $275 billion or about SDR 193 billion of the new allocation will go to emerging markets and developing countries, including low-income countries.
“We will also continue to engage actively with our membership to identify viable options for voluntary channelling of SDRs from wealthier to poorer and more vulnerable member countries to support their pandemic recovery and achieve resilient and sustainable growth”, Georgieva said.
However, it would be recalled that earlier in July, the IMF’s executive board announced its decision to support the proposal for the general allocation of Special Drawing Rights (SDRs) equivalent to $650 billion to address the long term global needs for reserves during the worst crisis. Then, it maintained that the SDR allocation will help every IMF member country; particularly vulnerable countries, and strengthen their response to the COVID19 crisis.
Additionally, President Emmanuel Macron of France, at the summit in Paris on Africa financing, sometime in May 2021, agreed to work towards convincing rich nations to reallocate $100 billion in their IMF special drawing rights (SDR) to African states by October, stating in agreement with other African and European leaders at the summit, that impoverished African states must not be left behind in the post-pandemic economic recovery.
The IMF and World Bank chiefs had come to an agreement, in April, on boosting SDRs by $650 with the extension of a debt-servicing freeze to developing countries to help them deal with the pandemic. The decision saw a total of $34 billion earmarked for Africa.
One key decision following this development would have to be for members with strong external positions to voluntarily channel part of their SDRs to scale-up lending for low-income countries through the IMF’s Poverty Reduction and Growth Trust (PRGT). The fund has hinted that concessional support through the PRGT is currently interest-free.
Businessamlive Website Stats