IMO STATE GOVERNMENT HAS expressed its readiness to partner with a Chinese firm, Cherry Automobile Holdings to establish an automobile plant in the state. This is in keeping with the electoral campaign promises made by Governor Emeka Ihedioha that his government would partner with local and foreign entrepreneurs to industrialise the state. 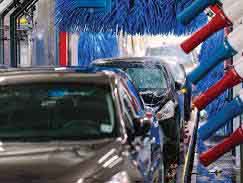 During the electioneering campaigns, Ihedioha did not only say he would industrialise the state, but also that his government would create 135 manufacturing enterprises which would be localised in the 27 local government areas , five to be established in each local government.
Just less than two weeks after he was sworn-in, his government has held talks with the management of a Chinese firm, Cherry Automobile Holdings with a view to establish its presence in Imo.
An industrialist who didn’t want to be named said the move was a good commencement to make good his promise of bringing foreign firms to Imo State.
Cherry Automobile Holdings is one the automobile companies in the world that produces all range of vehicles, business a.m. was informed.
Uche Onyeagucha, secretary to the government, who received Christopher Igwe, the country representative of the company, Perry Huo, the Africa sales director and other members of Imo-China InNEWS vestment Centre, assured them of the willingness of the government to partner with the management of Cherry Automobile company for the establishment of automobile plant in the state.
He expressed his happiness on the intention of the company to site an automobile plant in the state, saying that the state government would be ready to partner with the company to achieve the project because one of the cardinal points of Emeka Ihedioha administration is to make Imo State the economic nexus and entrepreneurial hub of the Southeast region.
“His Excellency Rt Hon Emeka Ihedioha will ever be ready to enter into strategic partnership with relevant stakeholders and genuine foreign investors to revive the economy of the state,” Oneagocha said.
He revealed that the development plan of the present administration is to deploy a well-thought-out public private partnership initiative in project conception and execution, and called on the management of the company to forward their proposal and letter of intent to the Governor for take-off action.
Christopher Igwe, the country representative of the company thanked the SGI for extending a hand of partnership to the company for the establishment of an automobile plant in the state, saying that with the support of the state government, the company would ensure that the project was established.
Meanwhile, the Africa sales director of the company, Perry Huo, commended the secretary to the government of Imo for receiving them on behalf of the Governor and expressed assurance that with the establishment of the automobile plant in the state, the economy of the state will be revived.