By Dikachi Franklin, in Owerri
A measure of relative sanity  may reign  among the traders in the way they conduct their businesses at the markets in the Owerri municipality and environs. This is expected to reduce the rising  incidences of sharp  practices prevailing in the markets . 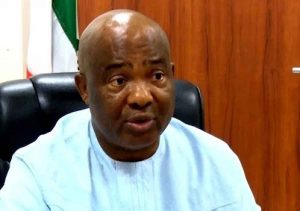 Many residents in the city have complained to Business A.M. and the leadership of the Imo State Amalgamated Traders and Marketers  Association (ISAMATA) and perhaps, other people, about the manner  traders in the Imo Alaba International Market along Aba Road, Naze;  Relief Market, along Egbu Road, Owerri, the markets in the municipality and environs engage in sharp practices, sale of adulterated products and other fraudulent trading activities .

It is against this backdrop that the leadership of ISAMATA led by its president, Emma Ezeanochie, inaugurated  some committees recently in his office to check the malpractices in order to bring sanity to the markets, restore  buyers’ confidence, as well as normalise  sellers’ and buyers’ relationship .

Ezeanochie gave some visible instances of the sharp practices as evidence, and went further to say that the association’s office had been inundated with some worrisome reports where traders used their operations  to threaten cordial  and peaceful coexistence amongst themselves  in the various markets.
Therefore, “it is necessary for us to mitigate friction, quacks and quackery and other unwholesome practices by traders in our markets; that prompted this inauguration today,” he said.
DonChris Okere, administrative secretary , ISAMATA, reeled out the code of conduct for the inaugurated  committees and the members, stating that ISAMATA was creating a database for the state government to profile their actions and operations towards a common goal.
He enjoined them to ensure that they operated in line with the laws of the Imo State government, as well as with the norms of the society, while generating revenue  for the government  and the leadership of the markets.
Businessamlive Website Stats