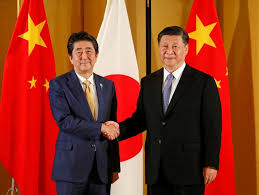 Both countries are locked in a trade dispute with the United States as the world’s biggest economy threatens its major trading partners with tariffs to reverse what President Donald Trump says are unfair imbalances that hurt the U.S. economy.
Meeting ahead of a two-day G20 summit in Osaka starting on Friday, Xi and Abe had a “very frank exchange”, including issues between the United States and China, Japanese deputy chief cabinet secretary Yasutoshi Nishimura said. He declined to elaborate.
“The two leaders (Abe and Xi) agreed on developing a free and fair trading system,” Nishimura told a briefing on the bilateral summit.
A major focus of the G20 gathering will be the outcome of a meeting between Trump and Xi scheduled on Saturday. Trump said on Wednesday that a trade deal with Xi was possible this weekend, but that he was prepared to impose tariffs on virtually all Chinese imports if disagreement persisted.
Abe and Xi agreed to continue to work toward creating multilateral free-trade pacts, including RCEP (Regional Comprehensive Economic Partnership) and a trilateral Japan-China-South Korea free trade agreement, Nishimura said.