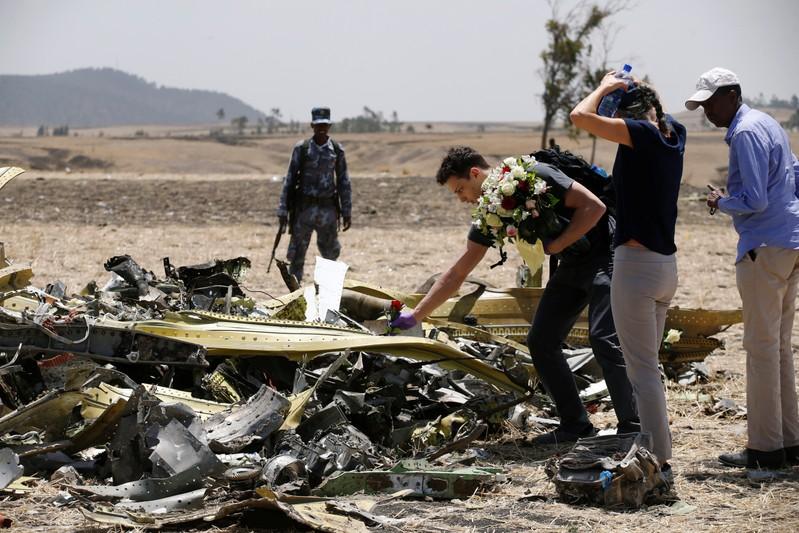 The causes of the Flight 302 tragedy will likely take months to establish. While much of the international focus has been on U.S. planemaker Boeing and its 737 MAX 8 jet, the airline’s reputation could also hinge on the results of the investigation.
Although crash inquiries focus on preventing future accidents rather than attributing liability, any findings that the carrier fell short in plane maintenance or piloting could be damaging.
For the present, however, passenger confidence in Ethiopian Airlines, long regarded as one of the most reliable in Africa, has remained steady, according to the company. Cancellation and booking rates are unchanged since the crash, said spokesman Asrat Begashaw.
“We are operating as normal,” he told Reuters. “Our brand is keeping its level, and we are okay.”
Two banking sources with knowledge of the matter said that, barring a major new twist in the investigation with long-term fallout, banks were still comfortable lending to Ethiopian Airlines.
“Ethiopian is a solid company,” said one, an official from an international bank that helped finance the acquisition of some Ethiopian Airlines planes. “No reason to change the way the bank sees its credit risk at this point.”
A vote of confidence from lenders is important for the airline because its years of rapid expansion have largely been financed by international borrowing.
The second source, a top European aviation banker, said Ethiopian Airlines was “a good airline, with a good reputation”.
“So unless it (the crash) is a major problem of piloting or maintenance – and it is far too early to talk about that – they will still have access to financing,” the source added.
The sources declined to be identified because the matters are confidential.
Ethiopian Airlines has borrowed from foreign banks including JP Morgan, ING Capital and Societe Generale over the past decade. It also has outstanding bonds worth $540 million, though none due until 2024, Refinitiv data shows.
The borrowing helped finance the acquisition of stakes in or establish partnerships with at least four African carriers, establishing hubs to feed traffic into Addis Ababa. Last year, the Ethiopian capital overtook Dubai as the main gateway for long-haul passengers into Africa.
The airline’s fleet grew from 35 planes in 2007 to 111 in 2019. It now flies to more than 119 international destinations, up from 52 a decade ago.
The expansion has made the state-owned carrier, founded in 1945, the most profitable major airline on the continent. Ethiopian’s net profit in the 2017/18 financial year rose to $233 million from $229 million the previous year; operating revenue jumped 43 percent to $3.7 billion.
Last year, Prime Minister Abiy Ahmed announced plans to sell a minority stake in the airline as part of a broad strategy to open up the country to foreign investors.
Industry analysts said it was too early to evaluate the impact of the crash on the airline’s long-term plans but said, for now, its reputation remained largely intact.
“It’s a very strong management team, with good vision,” said Nawal Taneja, an author and professor at Ohio State University’s Center for Aviation Studies. “We’ve got to look at the strength of the airline as a whole, not just this one incident.”
Those who want to travel across Africa have few options other than flying. Conflict, poor roads, and limited cross-border train transport often make travel by land difficult.
At Addis Ababa’s Bole International Airport, businessman James Markland said he felt no reservations about flying with Ethiopian Airlines and had just come back from a day trip with the carrier to Asmara, capital of neighboring Eritrea.
‘Similarities’ found in Boeing crash probe
“Both flights were fine,” the 62-year-old told Reuters on Tuesday. “They were pretty full.”
Analysts said the Flight 302 crash was unlikely to damage Ethiopian’s partnerships with African carriers, key to a strategy that helped increase passenger numbers from 2.5 million a decade ago to 10.6 million last year, or with other industry players.
One such partner is ASKY, a Togo-based carrier which Ethiopian Airlines helped launch in 2010.
“Ethiopian’s accident has not affected our partnership in any way,” said Lionel Tsoto, the airline’s head of public relations. “We continue just as before.”
Global aviation leasing firm GECAS said the airline was a “close and valued partner who we look forward to working with in the future”.
The crash, which saw the Nairobi-bound flight go down minutes after take-off from Addis Ababa, triggered a global grounding of 737 MAX planes, wiping about 10 percent off Boeing’s share price. GRAPHIC: here
Investigators have noted similarities with another deadly crash in Indonesia five months ago involving a plane of the same type owned by Lion Air, but safety officials stress the investigation is at an early stage.
Ethiopian Airlines, which grounded its handful of remaining 737 MAX planes, said it would decide whether to cancel orders for 29 others after a preliminary investigation.
Analysts said it was unlikely that the carrier would cancel the orders, worth $3.5 billion at the current list price, because Boeing would have to fix any problems before regulators permit the jet to fly again.
Boeing will be keen to retain the airline as a customer; more than half of Ethiopian’s fleet are Boeing jets.
“Ethiopian have been very loyal to Boeing in the past,” said Phil Seymour, chief executive of the IBA Group, a Surrey-based aviation consultancy.
“They will be in control of the conversation with Boeing now,” he added. “I would suspect that the business decision is to stick with the order.”
Businessamlive Website Stats