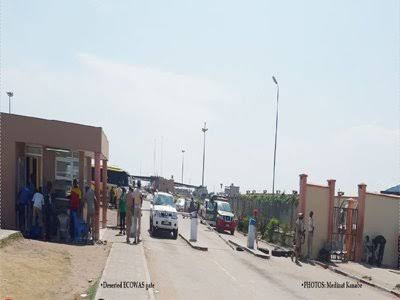 Hameed Ali, comptroller-general of the Nigeria Customs Service, on Tuesday appealed to businesses in the country to take advantage of closure of Nigerian borders with neighbouring countries to create new businesses and grow existing ones.

Ali told the Lagos Chamber of Commerce and Industry at a symposium to assess the impact of the land border closure on the Nigerian economy, that the land drill would help the country attain food sufficiency if everyone would get to work.

“We equally appeal to the business community to see the ongoing border drill as an opportunity to create a conducive environment for genuine local and international business to thrive in the interest of national security and development. While we call on Nigerians to be patriotic by patronising Nigerian-made goods and agro-products, we are certain that this will help the country in reaching self sufficiency in local food production, create job opportunities and boost our economy as well,” Ali said.

According to him, the partial border closure has so far, curbed the smuggling of foreign rice into the country, in addition to prohibited items.

He said, “Our series of interactions and engagements with the National Rice Millers Association of Nigeria (NRMAN) since the  commencement of this exercise has shown that the border closure has impacted positively on that sector.

“On the  average generation, the NCS daily revenue collection before the border closure ranged between N4 billion to N5 billion, now the NCS collects N5 billion to N6 billion daily as a result of increased throughput at the nation’s seaports. This will in turn be used to build more infrastructures and develop critical sectors of the nation’s economy.

In the area of security, Ali, a retired army colonel claimed “the ongoing exercise had recorded a great number of seizures (arms and ammunition) and arrests that would have had grave security consequences. Other seized items include: parboiled foreign rice, kegs of vegetable oil, motorcycles, containers of pangolin scales, bleaching reagents, donkey skin, pharmaceutical products (in miligrams above the recommended dosage) illicit drugs such as cannabis etc. So many illegal migrants have also been arrested.”

While asserting that 95 percent of illicit drugs and weapons used for acts of terrorism and kidnapping in Nigeria come through our porous borders, the Customs CG said since this partial closure, these heinous acts had been drastically reduced.

He said through diplomatic channels, government would continue to engage neighbouring countries on the need to comply with ECOWAS Protocol on transit trade.

“Goods that are on the prohibition lists to Nigeria such as used clothing, poultry products, illicit drugs, vegetable oil etc should not be exported to Nigeria by our neighbours under the cover of the ETLS protocols. As a result of the closure, Niger Republic circulated an order banning the exportation of rice in any form to Nigeria. I addition, the national assembly is in support of the executive directives on the border closure and the efforts of the security agencies in executing the task.

“Importantly, the exercise has provided a unique platform for the various participating agencies to operate jointly thereby, strengthening inter agency collaborations and reducing animosity among government security agencies It is also necessary to place on record that this is the first exercise in recent time, that the military, paramilitary as well as intelligence and security agencies have come together to conduct such an operation which is akin to a national security exercise. A united and strong security architecture is indeed necessary for the security of the nation,” Ali maintained.