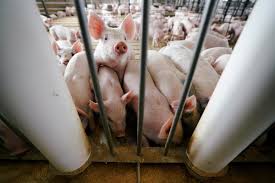 But the sector has largely offset those massive losses by cobbling together new customers in smaller markets from Colombia to Vietnam, according to a Reuters analysis of data from the U.S. Meat Export Federation and the U.S. Department of Agriculture (USDA).
As American farmers pin their hopes for a trade deal on Trump and Chinese President Xi Jinping’s agreement to restart talks at last week’s G20 summit, the pork industry stands out for its success in avoiding the sharp sales reductions that have slammed other U.S. farm sectors, such as soybeans and sorghum.
Overall, U.S. pork exports fell 3.9% by volume and 8.4% by value from May 2018 to April 2019, compared to a year earlier, according to data compiled by the U.S. Meat Export Federation. China increased its tariff on U.S. pork in April of last year and again in July, when it imposed tariffs on soybeans.
By comparison, total U.S. soybean exports dropped 13.7% by volume and 19.2% by value during the same period, while total sorghum exports dropped 72.8% by volume and 73.6% by value, according to the USDA.
The boom in small-market sales has “been a savior for the pork industry,” Iowa hog farmer Dean Meyer said.
The industry’s salvation has roots in global marketing efforts that began more than a decade before the U.S-China trade dispute, as American hog farmers and their trade groups sought to take advantage of a boom in protein demand linked rising incomes in emerging markets.
They visited importers and grocery stores in developing countries, taught buyers how U.S. pork is produced and touted its quality to chefs and bloggers around the world, according to participants in the trade trips. Those efforts took years to pay off.
As China and Mexico reduced their purchases last year, a subsequent drop in U.S. pork prices helped encourage alternative buyers to ramp up purchases – particularly from smaller markets that had trade agreements with the United States, such as Colombia and South Korea.
The sector’s ability to avoid a sharper decline in total exports underscores the importance of developing a diversified customer base to guard against any trade disruptions with major importers.
The soy industry had grown so heavily dependent on China – which before the trade war purchased 60% of U.S. soy exports, worth about $12 billion – that its more recent efforts to find new markets couldn’t make up for the business it lost in the trade war. Sorghum, a much smaller crop, is even more dependent on China, which had accounted for 80% of U.S. exports.
By contrast, the U.S. pork industry relied on China and Hong Kong for about 20% of exports by volume in the $6 billion market before the trade war. Hog farmers started to worry years ago about the risk of a decline in demand from China, which previously blocked some U.S. pork over the use of a drug that helps fatten hogs.