Nano Tools for Leaders® — a collaboration between Wharton Executive Education and Wharton’s Center for Leadership and Change Management — are fast, effective tools that you can learn and start using in less than 15 minutes, with the potential to significantly impact your success. 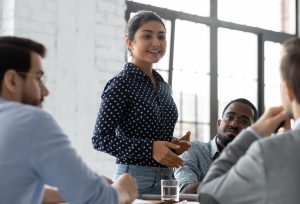 Contributor: G. Richard Shell, Wharton professor of legal studies and business ethics and author of The Conscience Code: Lead with Your Values. Advance Your Career. Shell is also co-author of the book The Art of Woo: Using Strategic Persuasion to Sell Your Ideas.

Increase your influence and get more of what you want by mastering the art of persuasion.

Persuading others to go along with a course of action, to agree to a commitment, or to accept a decision can be difficult even for highly experienced leaders. Often, that’s because of a mistaken belief that it’s all about the evidence: Make your data-supported case, and you’ll win. In fact, persuasion is not just about rhetoric. There’s plenty of work to be done before you even approach an individual or team.

First, you need to understand who to talk to and, just as importantly, in what order. That means identifying the connections between people and how to draw the shortest distance between any two of them in an organization (hint: it’s almost never a straight line). Once you’ve got a plan for strategically reaching out to the right people in the right sequence, you must map out what you want from each person.

Have a very specific goal for each encounter. It may not be money or authority. It could be that you need them to open the door to someone they know better than you do, or to give you access to some important information. Having a systematic strategy for these conversations beats just following your gut every time. You need to be aware of who may put up resistance, what kind of resistance it might be, and how you can adjust your pitch to better appeal to them. A one-size-fits-all approach is almost always doomed to fail.

It’s always about relationships. As the African folk saying goes: “If you want to go fast, go alone. But if you want to go far, go together.” Ask yourself throughout the workday: “In this interaction, how can I leave the relationship better than I found it? Can I find a way to help this person solve a problem, support them in an important task, or assure them that their efforts are noted and appreciated?”

Grab their attention. Develop and practice the perfect five-minute pitch. Nobody is going to listen longer than five minutes if you don’t get that right. We teach a simple four-step structure for that pitch: 1) frame the problem so they can understand it and accept it as legitimate, 2) explain how the problem arose, 3) propose your answer in simple terms, and 4) make the case why your answer is the best one compared with obvious alternatives.

Give them credit. When you make others look good, they want to support you. By far the most powerful motivation in the social aspects of work is the need to feel respected and appreciated. Self-esteem is like oxygen — people need it to live. When you share the credit for success in important undertakings, and when possible simply give away the credit entirely to others, people will come back to you the way bees return to a flower that has nourished them. Of course, it does not pay to be a doormat when others steal the credit for things you do away from you. But when you can be generous, be as generous as possible.

Practice fairness. In the American South, people like to say, “Pigs get fat, but hogs get eaten.” Build trust by refusing to overreach. Working relationships thrive on reciprocity, the give-and-take of favors, accommodations, taking turns, and exchanging information. When you are seen mainly as a “taker” in social interactions, people stop wanting to cooperate with you. That puts sand into the gears of working life and will ultimately make your job much, much harder.

Develop multiple paths, then pick the best one for the most people. Brainstorming a variety of options for solving problems rather than settling on the first one you happen to stumble upon will give you the chance to enhance working relationships with more people. You will also solve problems in ways that do not create new or unexpected issues for others. The chances are good that the first solution you come up with will work well for you, but the second or third may work equally well for you but also better for others. To put it simply: consult widely before deciding what to do. Then examine the available options from multiple perspectives, not just your own.

How One Leader Uses It:

When Tyler Odean was product leader for Chrome at Google, he wanted to go forward with a controversial project. A senior engineer disagreed. “For various reasons,” he says, “that person was not able to attend the decision meeting. It would have been really easy to run up the scoreboard and only present arguments in my favor. But that would have worked against the team’s desire to understand the truth. I worked hard to represent the case that the engineer would have made if he had been there. When the decision was made to go with my proposal, no one felt like it was a gimmick. I wasn’t trying to sweep his arguments under the rug but instead treated them with respect. I was an honorable debate partner.”

Odean, who also served as product lead at Pinterest, says good persuasion is subtle. “The most persuasive people have the least conflict. You can make a big, dramatic argument and get what you want. In reality, though, that’s a failure. Winning that way means you just barely persuaded people. Whatever you want in a specific situation, it’s small in comparison to the total number of things you want from that relationship over time. We sometimes have a zero-sum way of thinking about it: Go in and win by sheer force of will. That’s not what I consider persuasion. You need to be open to the other person, and try to build consensus together. If people believe that your point of view is baked in before they talk to you, or if you come across as an ideologue, you are a threat to be warded off. Instead, approach others as allies. You are seeking the truth with them instead of being an outside force.”