While Europe is about to receive a new ASX that is nothing more than a lazily rebadged Renault Captur, it appears that other markets, and may be not likely Nigeria will receive a more authentic Mitsubishi compact SUV.

Revealed at the Vietnam Motor Show penultimate week, the Mitsubishi XFC Concept that you see here will spawn a production model that will be aimed at ASEAN markets. And somehow. 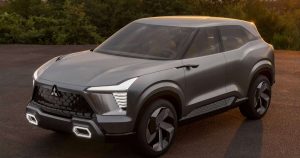 “An electrified variant to the line-up is also planned and to also roll it out in regions outside ASEAN. We hope to grow the model from a vehicle for the ASEAN market to a global strategic vehicle which will include Nigeria, making it a core model like our sales-leading XPander crossover MPV,” Allison said.

Mitsubishi hasn’t released any technical details on the upcoming product as yet, but the above statement does imply that a hybrid drivetrain will be considered for our market, even as the new crossover could share a platform with the XPander MPV.

The new compact SUV will go up against other compact SUVs like the Hyundai Creta and Kia Seltos, and this means that it could well serve as a replacement for the ageing ASX in the markets where it is sold.

Market watchers  can only hope that the styling of the production model doesn’t stray too far from the XFC Concept, which signals a new design language for the Japanese brand, with its T-shaped headlights and taillights, and a large grille that appears to take inspiration from the Lancer Evo X.

In keeping with today’s trends, the cabin features a large dual-screen that combines the digital instrument cluster and central infotainment system in a single unit.

As for the driving characteristics, the company claims that the new vehicle has “plenty of ground clearance” and four drive modes, including a new ‘Wet’ mode that was designed with monsoon-affected regions in mind.