The National Union of Banks, Insurance and Financial Institutions Employees have been directed by the National Executive Council (NEC) of the Nigeria Labour Congress (NLC) to ensure total compliance with the planned nationwide strike action which begins from Monday 28th September, 2020. 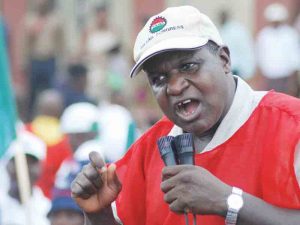 A general circular issued and signed by Mohammed Sheikh of the labour union and accessed by Business A.M. explained that the executive council has resolved to embark on the nationwide strike over the hike in the pump price of petrol and electricity tariff.

“The National Executive Council (NEC) of Nigeria Labour Congress in their meeting on Tuesday 22nd September 2020 resolved to embark on a nationwide strike as from Monday 28th September 2020 over hike in the pump price of petrol and electricity tariff. In this regard, you are therefore directed by this letter to ensure total compliance of this directive by your organization/Zonal Council. We promise to keep you posted as events unfold. Your cooperation in this regard will be appreciated,” the circular reads.

Meanwhile, the NLC president, Ayuba Wabba, said on Tuesday that the decision to embark on the strike was taken after the Central Working Committee (CWC) of the union reviewed the outcome of the last held meeting between the government and organised labour on the 15th of September.

Ayuba further said that the organised body resolved to reject in its entirety the hike in electricity tariffs by almost 100 per cent as well as the pump price hike, all in the name of deregulation, coupled with other government policies that include the 7.5 per cent VAT increase as included in the 2020 Finance Bill, as well as unsolicited charges by commercial banks on customers with no explanations.

On the other hand, the trade Union Congress (TUC) after its meeting held in Lagos to review strategies has begun members mobilisation in collaboration with the NLC and civil society allies to down tools and join the planned strike.

A statement issued by the TUC president, Quadri Olaleye, after the parley, revealed that the leadership of the group has sent out mobilization letters to all its state chapters and members in preparation for the proposed protest.

CBN, NIPOST to kick off microfinance banking in seven locations

Corporate taxes to increase by 0.5% as competition bill goes for assent