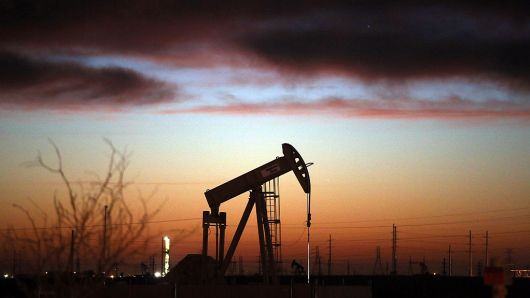 Oil pumps are seen at sunset outside Vaudoy-en-Brie, near Paris, France April 23, 2018. REUTERS/Christian Hartmann
Brent crude was down 37 cents, or 0.6 percent, at $66.02 a barrel by 1225 GMT. U.S. West Texas Intermediate (WTI) crude was down 13 cents, or 0.2 percent, at $56.81.
Factory activity in China, the world’s biggest oil importer, shrank for a third month in February as export orders fell at the fastest pace since the financial crisis a decade ago.
“Further evidence of a slowdown in China hit risk sentiment,” said Jasper Lawler, head of research at futures brokerage London Capital Group.
A Reuters survey of 36 economists and analysts on Thursday indicated growing pessimism over the prospects for a significant price rally this year.
They forecast Brent crude oil futures to average $66.44 a barrel in 2019, slightly below the $67.32 projected in January.
“In the short-term, oil markets are going to be characterized by supply tightness on international markets,” said Emirates NBD’s Edward Bell.
“Over the rest of 2019, though, the rising oil price sits incongruously with slowing economic growth in major markets.”
U.S. Trade Representative Robert Lighthizer also dampened expectations of a swift resolution to the trade dispute between China and the United States after hopes had been raised by reports of progress on key sticking points.
Lighthizer said issues with China were “too serious” to be resolved with promises from Beijing to purchase more U.S. goods and any deal needed to include a way to ensure commitments were met.
Crude prices have also been dragged down by surging U.S. oil production, rising more than 2 million barrels per day (bpd) in the past year to a record 12.1 million bpd.
Supply cuts by the Organization of the Petroleum Exporting Countries and allies such as Russia – a group known as OPEC+ – have offered some support since January.
That reduction helped to drive down U.S. commercial crude inventories by 8.6 million barrels to 445.87 million barrels in the week to Feb. 22.
Stocks fall for third day as investors dial down trade hopes
“Crude imports into the U.S. fell 1.6 million bpd last week, to a two-decade low,” ANZ bank said on Thursday.