Oil prices rose 2.5% on Wednesday after industry data showed U.S. inventories fell more than expected and as major U.S. producers evacuated rigs in the Gulf of Mexico before a storm. 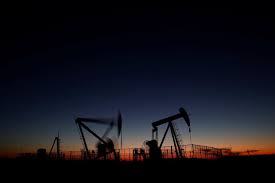 U.S. West Texas Intermediate (WTI) crude futures Clc1 climbed $1.58 to $59.41 by 1326 GMT, after hitting a session high of $59.53.
Brent crude futures LCOc1 were up $1.70 at $65.86, but below a session high of $66.00.
Data from the American Petroleum Institute (API) on Tuesday showed U.S. crude inventories fell by 8.1 million barrels in the week to July 5 to 461.4 million, compared with analyst expectations for a decrease of 3.1 million barrels.
Official figures from the government’s Energy Information Administration (EIA) are due later on Wednesday.
Major oil firms began evacuating and shutting in production in the Gulf of Mexico after weather forecasts warned that a tropical disturbance might become a storm on Wednesday or Thursday.
“For all the doom-mongering on the demand front, oil prices are getting a much-needed kick up the backside this morning courtesy of Mother Nature,” said Stephen Brennock, an analyst with PVM.
Chevron Corp  Royal Dutch Shell , BP (BP.L) and BHP Group are removing staff from 15 offshore platforms. Exxon Mobil said it was “closely monitoring” the disturbance to determine if its facilities might be affected.
The Gulf of Mexico is home to 17% of U.S. crude oil output which stands at around 12 million barrels per day (bpd).
The U.S. and global benchmarks have gained this year as the Organization of the Petroleum Exporting Countries (OPEC) and big producers such as Russia have curbed output to bolster prices.
The alliance, known as OPEC+, agreed last week to extend their supply-cutting deal until March 2020.
Tensions around Iran’s nuclear program and recent incidents involving oil tankers in the Gulf have also supported prices.
“The ongoing geopolitical tensions between the United States and Iran continue to add a still unquantifiable level of support,” said Saxo Bank commodity strategist Ole Hansen.
A U.S. general said Washington hoped to enlist allies over the next two weeks or so in a military coalition to safeguard strategic waters off Iran and Yemen, where the United States Washington blames Iran and Iran-aligned fighters for attacks.
Iran has long threatened to close the Strait of Hormuz, through which almost a fifth of the world’s oil passes, if it was unable to export its oil due to U.S. sanctions.
Businessamlive Website Stats