A little over three weeks after the first case was detected in California, omicron, the latest mutation of the coronavirus is now present in all 50 US states, driving intense fear and anxiety. Markets seesawed as reports of omicron dominated the news circle last week.  Stocks took a beating at the New York exchange. While oil prices continue to rally on inventory drawdown in the US, many other sectors of the economy have struggled to stay afloat. Depleted US hospitals struggle to prepare for the worst.  Many no longer have the requisite manpower to muster the same all-hands-on-deck response as they did in previous surges. Experts warn that industries from healthcare to hospitality could face a pingdemic-style unravelling. 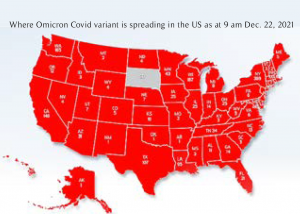 In just three weeks, omicron went from being a nonexistent variant in the US to displacing the previously dominant delta variant commanding 73 percent of all sequenced cases, according to Centers for Disease Control and Prevention.  There were 261,339 new cases between Thursday and Friday alone, up 10 percent from the previous day. The current moment is an eerie echo of December 2020 when a tsunami of infections drove the country into real panic. For now, most analysts do not believe that omicron will cause a full-blown market crash. If a crash does occur, it will likely be due to a confluence of factors, including omicron, inflation, supply chain issues and stimulus tapering by the Federal Reserve.

But while municipal governments contemplate containment measures, President Joe Biden announced Tuesday that the federal government will not impose a nationwide lockdown.

Déjà vu all over again

The sudden surge in coronavirus infection is massively disrupting an economy on bended knee.  For the US economy, it is déjà vu all over again.  After hemorrhaging jobs to historic levels in 2020, the economy began an upward tick early in 2021.  Growth soared to 6.3 percent in the first quarter and 6.7 percent in the second quarter. Latest figures from the US Commerce Department indicate the economy grew at a 2.3 percent rate in the third quarter, slightly better than anticipated. Prospects of a consolidation now seem doomed by a surge in omicron infection.

The Federal Reserve, the US central bank, is worried omicron could exert more upward pressure on inflation, which is already sky-high. Inflation rate accelerated to 6.8 percent last month, the highest since June of 1982. For industries like travel and leisure, it is another gut punch to systems still reeling from recent shutdowns and sudden shifts in consumer behaviour.

Researchers at the University of Washington warn that infections could peak at 2.8 million new daily cases before the end of January. “We are expecting an enormous surge in infections … so, an enormous spread of Omicron,” Chris Murray, director of Institute for Health Metrics and Evaluation at the university, told a local newspaper. The same model predicts that the US may see a total of about 140 million new infections from January 1 to March 1, 2022. Murray said more than 90 percent of people infected with omicron may never show symptoms.

The real oddity with omicron is that rate of infection does not predict the number of deaths. The first confirmed death by omicron was reported in Texas last Monday. The deceased was an unvaccinated man in his 50s who had previously had covid. This piece of good news has not assuaged concerns about the future.

The Grinch who stole Christmas

The steep uptick is casting a pall over a Christmas that many Americans thought would be different from the last one upending holiday plans and traditions. In Washington DC new infections rose 614 percent on Christmas eve.

“It’s no good news that we can’t gather again after an awfully difficult experience last year,” said Chijioke Okereke, a Nigerian business owner in Lynn, Massachusetts. Chiji’s hope for “some good times with friends,” this Christmas, is dashed. He makes an annual practice of hosting friends to some special African cuisines every Christmas. Chiji had planned to travel to Nigeria but put off the plan to next year due to covid concerns. This Christmas Chiji will be celebrating with his family. No guests.

An increasingly bleak picture is emerging across the country in more ways than one.  In-person dining at restaurants across the country dropped 13 percent this week from the same week in 2019, according to data from OpenTable, the reservations-booking website.  Omicron is threatening to be the grinch who stole Christmas.

Dr. Seuss’ in his 1957 classic How The Grinch Stole Christmas tells the story of the Grinch, a grouchy green creature intent on ruining Christmas for an entire village. Apparently enraged at the thought of the nearby village of Whoville having a happy time celebrating Christmas, the grinch disguising as Santa Claus with his dog, Max, raids the village and carts away all the Christmas things.

“Omicron has stolen our Christmas,” says Chris Nwogu, Chiji’s friend who lives in Peabody, a town of 50,000 residents north of Boston.

For Chiji and other Nigerians in Boston who might be looking to visit Suya Joint, the popular Nigerian restaurant in Boston, they would need more than the cost of the delicacies. Per new city rules, all patrons will be required to show proof that they have received at least one dose of vaccine before they can dine in a restaurant in the city.

The Nigerian American doctor who leads the Boston Public Health Commission, Dr Bisola Ojikutu, says the directive became necessary because, “new cases in our city have increased almost 90 percent compared to two weeks ago.” Ojikutu insists the mayor’s top priority, “is to keep the people of Boston safe and healthy and to ensure our schools and businesses can stay open. That requires getting as many people vaccinated as possible.”

United Airlines and Delta Air Lines cancelled a total of 280 flights on Christmas eve, citing personnel shortages amid the surge of COVID-19 infections, according to Reuters. Both airlines said a spike in omicron infections among crew members played a part in the cancellations.

“The nationwide spike in Omicron cases this week has had a direct impact on our flight crews and the people who run our operation,” said United spokesperson, Josh Freed, while announcing the cancellations. More than 1,000 flights were canceled in the US on Christmas eve, nearly 3,400 worldwide, according to Flightaware, an industry tracking site.

The National Basketball Association (NBA) has announced the postponement of five games due to covid. The National Football League (NFL) similarly postponed three Week 15 games. As cities like New York contemplate cancellation of their annual new year celebration, Ethiopia-born director general of World Health Organisation, Tedros Ghebreyesus, who is urging the cancellation, says: “An event canceled is better than a life canceled.”

For now, city officials say the event that normally attracts around 58,000 people in viewing areas, will be scaled back to 15,000 with social distancing and compulsory mask requirement for all attendees. In addition, all attendees older than five will be required to show proof of vaccination.

Covid-19 patients now account for one-third or more of the beds in all hospitals, according to the US Health and Human Services.  In Boston and New York, hospitals are seeing higher volumes of patients in the emergency department than ever before.  The surge is taking its toll on healthcare workers and many are already overwhelmed. As Craig Spencer, a New York-based emergency doctor says, “you can’t surge a circuit that’s been burned out. For frontline providers, there’s simply no new fuse that can fix the fact that we’re fried.”

Mental health support lines have seen a spike in calls since the onset of coronavirus.  Jennifer Battle, director of access for Texas-based Harris Center for Mental Health, told Texas Tribune newspaper that their support line has seen a 20 percent increase in calls since early December.

“The main key for anxiety is uncertainty, and the whole pandemic process is just a whole big bag of uncertainty,” says Battle.

The impact of Covid on mental health, she explains, is multi-pronged – loss of jobs, income, isolation from loved ones, housing, all of which can lead to depression, anxiety, worsening substance use. “In our inpatient psych unit, we have seen several patients with a primary psychotic disorder, who have been anxious to leave their homes, missing outpatient appointments, and becoming paranoid and more isolated.”

Adams worries that these impacts are likely to linger long after the virus has been contained. “Prior to COVID, mental health was an underserved area of medicine. The repercussions of COVID will be wide, and patients will need support from mental health, support we do not have at this time,” she says.

The rise in covid-induced mental illness has strong economic ramifications. According to the American Psychiatric Association, “employees with unresolved depression experience a 35% reduction in productivity, contributing to a loss to the US economy of $210.5 billion a year in absenteeism, reduced productivity, and medical costs.”

Despite deepening polarization, many on both sides of the US political divide agree that vaccination is central to returning to turning the tide on coronavirus. When he took office in January this year, President Joe Biden pledged to deliver the “most efficient mass vaccination plan in U.S. history”. The vaccine roll out has seen significant progress despite legal roadblocks. But as Biden himself acknowledged, it is not yet uhuru.

In a speech last week to assuage fears about omicron, Biden stated that “two hundred million people are fully vaccinated. We’re prepared. We know more.”  He charged unvaccinated Americas to see it as a “patriotic duty” to get vaccinated.

“I know some Americans are wondering if you can safely celebrate the holidays with your family and friends. The answer is, yes you can if you and those you celebrate with are vaccinated, particularly if you’ve gotten your booster shot,” Biden said.

Economic recovery from the pandemic, though bumpy, has not been derailed yet by omicron. The variant has only sparked uncertainty and anxiety across sectors in the face of that recovery.  For one, omicron is already affecting people’s behavior and business practices across the US.

Analysts say confidence and spending are likely to be depressed early in the new year. Odds are high that the economy may contract by as much as 3 percent in the first quarter of the year. Mark Zandi, an economist frequently cited by the Biden administration, recently revised his growth projection from 5 to 2 percent for the first quarter of 2022.

Growth could rebound quickly in the second quarter, if omicron eases out quickly. The recession that characterized the first and second waves of the virus was not attributable so much to uncertainty as it was to lockdowns. Faced with the ghastly prospect of more lockdowns, most states, including New York and California, the two largest economies in the US, have chosen not to lockdown this time but to ramp up vaccination.

Biden’s deputy treasury secretary, Wally Adeyemo, a Nigerian American, believes there is still a lot of money available from the $1.9 trillion economic rescue bill passed earlier in the year, to help provide the needed boost.  “If you look at state coffers at the moment, state and local governments have money in them that will allow them to address this variant,” Adeyemo told The Washington Post last week.