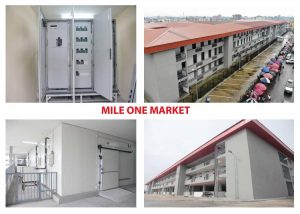 Several hundreds of traders of newly constructed multi-billion-naira ultramodern Rumuwoji (Mile One) Market and its flipside Fruit Garden Market in Port Harcourt are in celebratory mood that they would soon return to the shops that they lost more than five years ago in a deadly inferno that raised down the popular market on Ikwerre Road, Port Harcourt.

Governor Nyesom Wike is set to inaugurate the multi-billion-naira new market any time soon. The cost of the two imposing markets were not made available by the state government.

This time, the traders are moving into new shops built with modern facilities to aid trading in very conducive environment. Some of the facilities include: quality security infrastructure, water sprinklers to fight fire, fire station, cold room, clinic and storage facilities.

Most traders have described the imposing complex as an architectural masterpiece, which was built by SPG Construction.

Bassam Dahdah, general manager of SPG Construction, said that they started construction work in August 2017, shortly after Governor Wike promised to rebuild the market, and completed with all facilities installed about February 2019. He said that the Market is ready for commissioning.

Wike’s predecessor, Chibuike Amaechi had built one part of the market, then known as Phase 1.

Kate Ako, a trader, described Governor Wike as a wonderful leader who heard the cry of the traders and intervened when they needed him. She said that the market is one of the best in the country.

Chuks Emenike said that traders are happy that the Rivers governor kept his promise to deliver an international market.

“We the entire traders of Mile One Market earnestly thank our amiable governor for building the best market for us. He promised he will do it; and he has done it,” Emenike said. 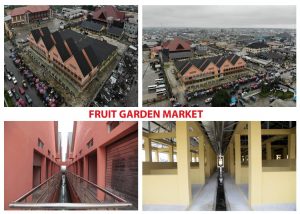 The chairman of Rumuwoji (Mile One) Market Union, Eze Ndubueze said Governor Wike will always be appreciated by Rivers traders for his commitment to their welfare. “The effort of Governor Wike as far as this market is concerned is excellent. This is the best Market around. On behalf of the traders, I am telling the Governor ‘thank you.’

Another trader, McDonald Ngozi said lauded the governor as a good leader because of his truthful nature and love for the delivery of quality projects; saying that the Mile One Market is a testament of the governor’s commitment to his people.

On the flipside of Mile One is the Fruit Garden Market at snout of D-Line, Port Harcourt. Here, fruit sellers are preparing to move into newly built line of shops equipped with key facilities that support fruit selling.

The market has open and lock-up shops. It also has a perimeter fence, a car park, warehouses and security features for the protection of the market.

Chigozie Nnodim, chairman of Fruit Garden Market Traders Union, said Governor Wike has clearly shown interest to get the market back since it got burnt late last year. “The governor has carried us along. He empowered us with money to re-start our businesses after the loss. He promised to reconstruct the market; and here we are; he has delivered a wonderful structure. We are looking forward to occupying the market, he said.