The Senate on Thursday urged President Muhammadu Buhari to initiate the process of computerising the nation’s oil sector in line with industry’s global best practices. 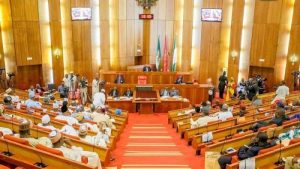 The upper chamber stated that doing this would curb the multifaceted challenges associated with the oil and gas production, transportation and sales business in the country.

This is even as it also mandated its joint committee on petroleum up stream, downstream and gas resources to convene a public hearing to ascertain the quantity of oil and gas being produced daily and the quality control mechanisms being adopted by the NNPC to ensure that the nation’s output conform to global best standards.

Other task set for the committee is to determine the level of wastages in petroleum products through pilfering, pipeline vandalism and leakages, and international best practices of computerized oil and gas business management, including pipeline protection and quantity and quality control.

The resolutions were reached after the Senate adopted a motion sponsored by Senator George Sekibo and 29 others on the “need to install computerized oil facilities management gadgets for Nigerian crude oil businesses.”

Presenting the motion, Sekibo said it was of major concern that while other countries in the same business venture have gone digital for the past 50 years, Nigeria is still using analogue technology in doing its petroleum technology.

He explained:”We still use human beings (4 persons) to monitor a kilometer of pipeline, giving undue opportunities to oil pilfered, giving rise to unnecessary pipeline explosion, causing deaths and unquantifiable loss of products and other human valuables.”

He regretted that Nigeria with over 61 years in oil business could not give account of total amount of products produced, sold, wasted and lost through pilfering, or pipeline vandalism.

The lawmaker explained that petroleum products business should have been given priority attention in terms of protection, expansion, quantity and total quality control especially with oil as the mainstay of Nigeria’s income and foreign reserves.

Noting that Nigeria is the biggest oil producer in Africa with maximum capacity of about 2.5 million per barrel, he lamented that “this meagre quantity is always under attack through pipeline vandalism and oil platform theft which has reduced quantity produced”.

Sekibo said:”One key area of fighting corruption is through effective management of resource itself, that is the source of revenue just as this administration emphasizes on the fight against revenue pilfering by the operators”.

“The computerization of oil management system assists in the pipeline protection, trigger off alarms when any section of the pipeline is disturbed for whatever reason.

“The system detects if there is a weak section, captures suspected intruders on the pipeline, and are equipped with fire fighting gadgets in the event of fire outbreak”, the lawmaker added..

Before the adoption of the motion, Senate President, Ahmad Lawan described the motion as a “genuine effort to ensure that we are not short-changed as a country.”