Seplat Petroleum Development Company Plc, the operator of the NPDC/SEPLAT Joint Venture assets of oil mining leases (OMLs) 4, 38 and 41, in partnership with the Sapele Okpe Community in Delta State, has expanded access to equal and qualitative higher education with the commissioning of a National Open University of Nigeria (NOUN), Sapele Teaching Centre. 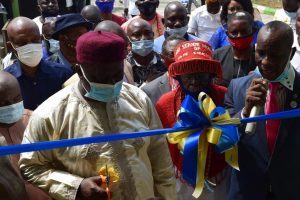 The company said the project and its accreditation by the National Universities Commission (NUC) was built at the cost of N126 million, under its general memorandum of understanding (GMoU) with its oil and gas host communities.

Funding of the project was from the NPDC/SEPLAT JV fund allocation to the Sapele Okpe Community.

The university teaching centre was commissioned by NOUN’s vice-chancellor, Abdalla Adamu, a professor, who was represented by the institution’s deputy VC (academics), Uduma Oji Uduma, a professor.

Seplat, which last week raised a balance of $260 million for its ANOH gas processing plant at Ohaji, Imo State, said its civil engineers’ team supervised the project and ensured timely project delivery and value for money.

Roger Brown, chief executive officer of Seplat, commended and congratulated the community for cooperating with the company in the selection and execution of the project.

He said that education is key to economic, political and social dynamics of the society. He said the university teaching centre will make higher education available and close to the citizenry both in the rural and urban areas of Sapele, Ethiope West and Okpe local government areas and their environs, including providing many women who would not have had the opportunity to attend university outside their area of residence, because of the need to take care of their family, and in certain cases, support them financially by pursuing daily economic activities.

Brown explained that access to quality, open and distance education in Sapele will boost the local economy, and significantly reduce the cost of access to quality higher education, and therefore, many parents who would ordinarily have been discouraged to send their children to tertiary institution because of big financial burden, will be encouraged to do so, in addition to mitigating against hazards associated with long road travels.

He said SEPLAT remains highly committed to providing opportunities for greater educational development for its host communities and Nigeria at large, explaining that quality education was a crucial tool for improving the prospects of higher income levels for individuals, and for the economic growth of local communities, states and the nation.

“With the commissioning of the university teaching centre, SEPLAT in partnership with its host community, Sapele, is helping the nation to achieve Goal 4 of the United Nations’ Sustainable Development Goals (SDGs), which is focused on ensuring inclusive and equitable quality education and promoting life-long learning opportunities for all,” Brown said.

Patrick Akamovba, the chairman of Sapele Okpe community, said, with the NOUN teaching centre, access to education in its full and extensive sense, means free and unrestricted, unimpeded and opportunities for many people to attain knowledge, expertise, and abilities available at the university level so that they can optimally participate and contribute to development of the society.