The conversion of Skye Bank to a bridge bank penultimate Friday has again brought spotlight on the performance of financial institutions in the country. With industry non-performing loans bursting the seems in most cases, analysts, investors and financial product consumers are worried about viability of the financial services industry, which have been buffeted by regulatory and operational headwinds.

The dwindling loanable funds available to banks due to regulatory compliance and high rate of deliberate default by bank customers have indeed put strain on most lenders, coupled with the general economic environment which has made doing business in the country a nightmare.

The intervention in Skye Bank by the CBN appears ominous, especially because it is coming on the 10th anniversary of the global financial crisis of 2008 for which a lot of experts have been writing, with some predicting that another crisis is just round the corner waiting to happen on the world. While the 2007/2008 crisis unfolded, there were many in regulatory and analysts circles who held their hands to their chests and swore that Nigeria was insulated from it. But they had not finished putting their hands down from their chests when the Nigerian financial markets got hit, showing that even though the Nigeri 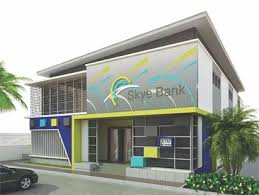 an crisis was said to be of a peculiar kind, it became clear that the country was not immune as had originally been assured. So when the CBN moved into Skye Bank, was it moving ahead of the global curve of those who argue that another global financial crisis is around the corner? Could the system be challenged?

Although the CBN has assured on the health of banking institutions, there appear to be some weak links in the industry, which Godwin Emefiele, the governor of the Central Bank of Nigeria (CBN) apparently alluded to while fielding questions from journali

“In every chain, there would always be strong points and weak points. What we would love to see is to ensure that the chain continues to remain strong in all aspects. But as we see areas where there are weaknesses we would do everything possible to make sure that we keep the chain link together,” Emefiele said.

A clinical perusal of the books of some financial institutions listed on the Nigerian Stock Exchange (NSE) indeed indicates that, beyond Skye Bank, there are others in the throes of gravitating towards the ‘bridge status’ on solvency and adequacy ratios.

gging in meeting some regulatory requirements.

The growing band of financial institutions failing in more than one regulatory parameter is now a cause of concern with analysts urging the CBN to better up its surveillance and regulatory oversight on the institutions to avert another round of distress in the industry.

Especially the regulatory framework, which sterilizes over 55 percent of available deposit of banks with the CBN at no interest, is seen as counterproductive in growing the economy and for the health of the banks.

Again, the worsening economic environment has made loan repayment difficult, thereby shortchanging banks of their interest incomes as well as deposits.

For most analysts, the decision of the regulatory authorities on September 21 is welcomed particularly as it is aimed at safeguarding the industry from another round of distress. They therefore urge the CBN to deal with such individual cases with dispatch in order to engender confidence in the system.

The Unity Bank case has lingered and analysts say the bridge treatment should equally apply. The last communication from the bank to stakeholders and the capital market community as regards unreleased financial statements was in the first quarter of the year.

Unity Bank stated as at April 5th 2018 that it was unable to release its audited financial statements for the year ended 31 December 2017 by March 31, 2018 as required by NSE rules but that it had forwarded the results to the CBN for review.

Although the bank noted that the results would be released upon conclusion of CBN’s review, capital market watchers have expressed concern over why a bank’s statement is taking almost 6 months to be reviewed, because as at reporting date, Friday 28 September 2018, the results were yet to be filed with the NSE.

The last financial report for Unity Bank filed with the NSE was almost one year ago where the bank recorded a 29 percent decline in profit for the nine-month period ended September 2017.

Analysts often times peruse the financial statements of companies in order to make projections and advise investors based on the company’s performance, which in the case of Unity Bank, would be difficult for that to happen.

This reason coupled with the need to foster a transparent and information-driven market also leads the NSE to impose a fine or penalty on companies that default with timely accounts submissions.

With Unity Bank reporting its second straight year of negative capital adequacy ratio as at 2016, financial analysis on the bank’s financial statement as at December 31, 2016 revealed that a gross non performing loan (NPL) of N361 billion constitutes about 95 percent of the bank’s gross loan and 73 percent of its total assets while the bank’s shareholders’ fund of N83 billion as at the period under review constitute 23 percent of the gross NPL.

Reports of the bank selling off its bad loans in a deal said to be finalized in the first half of 2019 are however rife, but the bank is yet to confirm the news to the market community.

The similarity between events shadowing the Unity and Skye Bank is unnerving especially from the investor point of view.

As at last week, confusion still trails the investment portfolios in Polaris Bank as investors, brokers and the general public are yet to know the position of investors of the erstwhile Skye Bank. Indeed Emefiele tried shedding some light on the position of Polaris, the bridge bank, which took over Skye Bank.

Emefiele said: “When we considered if taxpayers money will be invested in this bank (SkyeBank), in this case as a loan, we decided that there is a need to let shareholders know, particularly those we consider to be prominent and important shareholders of the bank that have lost their investment.

He also said that the new investors, which are majorly the CBN and AMCON “would try just like we have done in the case of depositors to make sure that small investors remain protected under some arrangement, but notwithstanding that fact, their holdings will be substantially whittled down.”

He said the concern for the apex bank was basically to keep depositors fund and ensure that over 5,000 staff of the bank were not kicked out to be added to the bulging employment challenge the country is facing.

Unity bank as at Friday closed with a market capitalization of N10.2 billion as outstanding shares stood at 11.7 billion.

The bank is surprisingly one of the best performing banking stocks on the NSE, as its share price has returned over 64 percent year to date. With more than 577,000 units of its shares sold Friday, the share price climbed 3.6 percent to 85 kobo showing prime activity taking place in the company stocks poses concerning risks to investors and particularly the capital market.

Meanwhile three working days following the announcement of Skye Bank’s take over, the CBN also posted a “Notice of Revocation of Licences of 182 other financial institutions (OFIs) comprising of 154 microfinance banks (MFBs), 6 primary mortgage banks (PMBs) and 22 finance companies (FCs), on its website.

The notice, which was later made unavailable made it difficult to ascertain a full list of the license revoked companies. With institutions like Fortis Microfinance Bank still battling with corporate governance issues, increasing the risks of investors and customers alike, analysts are advising investors to stay clear of such stocks till issues are resolved.

Fortis Micro finance Bank is also yet to submit financial accounts from as far back as December 2017. The company in February alluded to anomalies found in its December 2016 reports which impacted on results released thereafter.

Fortis however claimed that far-reaching house cleaning exercise being undertaken would culminate in the emergence of a leaner healthier bank.

A growing drive of re-capitalization is not lost on the country’s insurance sector. However, investors could face a similar trend of investment confusion with insurance firms without up to date financial statements.

These firms have been highlighted by the NSE to include African Alliance Insurance Plc. and Staco Insurance Plc. as 2018 defaulters, already fined heavily for several series of defaults.