South Africa’s ruling party has taken a decision to nationalize the central bank and it will be implemented, President Cyril Ramaphosa said. 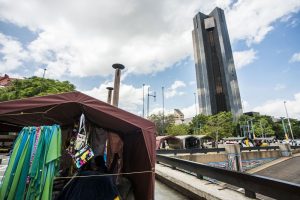 “We have got to go through processes,” Ramaphosa told parliament in Cape Town on Thursday. “There is no hidden agenda.”
Ramaphosa’s comments come a day after he was scheduled to meet with Reserve Bank Governor Lesetja Kganyago in Cape Town. Kganyago on Wednesday emphasized the importance of central bank independence in a speech on a university campus.
South Africa is one of a handful of countries whose central bank is owned by private investors and the move to bring it under the control of its citizens will affirm the nation’s sovereignty, Ramaphosa said.
The rand extended declines after Ramaphosa spoke, declining as much as 0.7 percent against the dollar. It was 0.5 percent lower at 14. 3408 per dollar at 2:44 p.m. in Johannesburg.
The Reserve Bank has about 770 shareholders and 2 million shares outstanding.
Investors are allowed a maximum of 10,000 securities each, which gives them a prescribed maximum dividend of 1,000 rand ($70)
The last traded price for the shares, which are available over the counter, was 9 rand in January