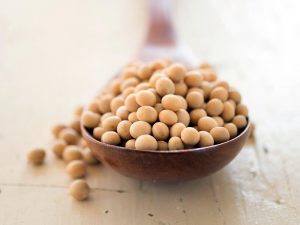 Traders focused on demand for crops, after the United States Department of Agriculture (USDA) updated its domestic production estimates in a monthly report issued earlier in the week.

In Argentina, one of the world’s largest exporters of soy oil/meal and third largest for raw beans, farmers increased sales of soybeans after the government implemented a more favourable exchange rate for exports of the cash crop.

Prior to this, local farmers were holding on to more soybeans than usual due to the country’s uncertain economic environment and fears over a potential devaluation of peso, the country’s currency.

In a bid to unblock soy sales and bring in much-needed foreign currency, the government initiated a favourable exchange rate for exporters of 200 pesos per dollar, far above the official rate of around 143 pesos.

Since that measure was undertaken, farmers have sold some 6.7 million tonnes of soybeans, the major Rosario grains exchange said, adding that Argentine farmers have sold 15.2 percent of the country’s 44 million-tonne 2021/22 soybean crop in seven days.

Commenting on this, analysts at Zhongzhou Futures in China said competition from South American supplies has started putting pressure on U.S. soybean exports.

“While we’ve answered a lot of the supply-side questions, now we have a tonne of demand-side questions,” Ted Seifried, chief market strategist of Zaner Ag, noted.

“We’re trying to juggle the idea of tighter-than-expected balance sheets, especially in soybeans and kind of caught in between,” Seifried said.

In other grain markets, corn futures closed the week on a negative note, while wheat futures edged higher.

Corn slipped 1/4 cent at $6.77-1/4 a bushel, while wheat climbed 14-3/4 cents at $8.59-3/4 a bushel. However, wheat prices have been curbed by increasing flows through the Black Sea region and cheaper prices for a record Russian crop.