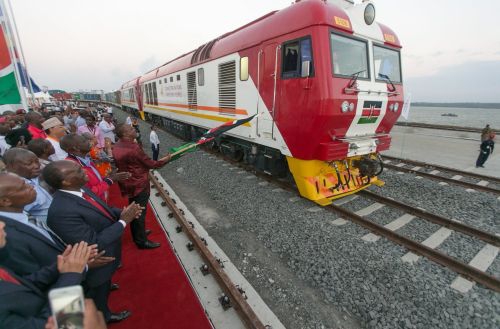 By Samson Echenim
The Government of Tanzania Ministry of Finance has signed a facility agreement with Standard Chartered (SC.com) Tanzania for a $1.46 billion term loan financing to fund the construction of the Standard Gauge Railway (SGR) project from Dar es Salaam to Makutupora.
Running approximately 550 kilometres long, the SGR project is one of the country’s biggest projects connecting Dodoma to Dar es Salaam via Morogoro and Makutupora. Once complete, the rail project will provide a safe and reliable means for efficiently transporting people and cargo to and from the existing Dar es Salaam Port.
South African Standard Chartered Bank rakes approximately 40 percent of its total annual earnings from Nigeria, handling governments’ accounts, but the bank has not financed any infrsatructural project in the country in recent time.
According to the Tanzania Railways Corporation, it is expected that the railway will address current congestion challenges and decrease freight service charges by 40 percent, as the railway will be able to haul up to 10,000 tons of freight, equivalent to 500 lorries, per trip. It will also connect Tanzania to Burundi, Rwanda and The Democratic Republic of Congo, DRC, thereby playing a key role in enhancing regional trade.
The project has already created more than 8,000 new direct employment opportunities for Tanzanians and has opened up opportunities for the local communities surrounding the project area to access social services such as shelter and food.
Standard Chartered Tanzania acted as global co-ordinator, bookrunner and mandated lead arranger on the facility agreement that is the largest foreign currency financing raised by the Ministry of Finance to date. The biggest component of financing comes from the Export Credit Agency Covered Facility from the Export Credit Agencies of Denmark and Sweden.
Speaking at the event to sign off the deal, Philip Mpango, minister of Finance and Planning, commended the bank.
“I am very delighted to sign off on this deal on behalf of the Government of Tanzania and its people. With the help of Standard Chartered and our partners, the project financing will further increase direct employment in Tanzania, and more importantly, enable our local communities the thrive as they will be able to gain access to wider social services such as food and housing.”
Mpango also commended and thanked the Governments of Sweden and Denmark, which were represented by their Ambassadors in Tanzania, for their confidence in the country’s economic growth. “These two nations, Sweden and Denmark, have shown us their true friendship not only in words but also in action. Please convey our country’s sincere appreciation to the Export Credit Agencies and lenders in your countries that have supported this signature project. As a country we shall honour our commitments as we have always done.” Mpango said.
In addition to thanking the Export Credit Agencies and lenders, Mpango also thanked the Development Bank of Southern Africa (DBSA), the Trade and Development Bank (TDB) and the African Export-Import Bank (Afrexim), for supporting the project in partnership with Export Credit Agencies from Denmark and Sweden.
He added that the funding would enable the project to be completed in good time as per the set plans.
Sanjay Rughani, Chief Executive Officer, Standard Chartered Tanzania, said the deal signified investor confidence in the market and demonstrated Standard Chartered’s international network capabilities and commitment to Tanzania.
“As a leading international Bank for Africa, with over 100 years of being in Tanzania, the African continent remains a key corridor not only for Standard Chartered but also our global clients. We are delighted to have reached this milestone in Tanzania to fund the SGR project that will deliver massive benefits to Tanzania and support the government’s 2025 vision of making Tanzania an industrialised country.” Rughani said.
Rughani added that the Bank will continue to leverage its unique network reach, and the credibility it has built over time, to further position Tanzania as the go-to destination for investments.
Sunil Kaushal, Regional CEO, Standard Chartered Africa and the Middle East said the deal signified the benefit of our unrivalled network capabilities into the region. “There is considerable appetite from the global investment community into Africa, with 80 percent of our top Corporate & Institutional clients using our Africa and Middle East network.  For Standard Chartered, Africa remains a priority for our business and clients, and we are proud to be able to use our expertise to support the Government of Tanzania with the finance needed for the SGR project.”
The sign off ceremony was also attended by the Ambassador of Denmark to Tanzania, H.E Mette Norgaard Dissing-Spandet and the Ambassador of Sweden to Tanzania, H.E Anders Sjoberg.
In attendance was also H.E Robert Mengoni, the Ambassador of Italy to Tanzania and Mr. Calumm Mcallum, Country Director, International Trade – for the British High Commission. The Country Manager for the Africa Development Bank  Alex Mubiru and Resident Representative for the IMF in Tanzania, Mr. Jens Reinke also attended the event.
Other key Government Officials included the Permanent Secretary from the Ministry of Finance and Planning, Doto James, Deputy Governor of the Bank of Tanzania responsible for Economic and Financial Policies, Yamungu Kayandabila, and the director general of the Tanzania Railway Corporation, Masanja Kadogosa.