The British pound has continued to spook investors amid fears of the U.K. crashing out of the European Union without a deal on Halloween day. 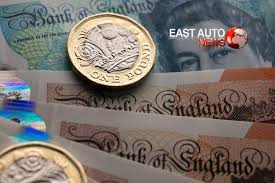 Sterling fell to a new 6-month low against the euro during Wednesday morning trade, with the risk of a no-deal Brexit and a dovish shift in Bank of England expectations weighing on the currency.
Boris Johnson, the current favored candidate to replace Prime Minister Theresa May, has repeatedly vowed to take the U.K. out of the EU with or without a deal on October 31, even refusing to rule out suspending parliament in order to ensure the exit date is upheld.
GBP had fallen to $1.2476 against the dollar by early afternoon on Wednesday, having broken below the significant $1.25 level, causing speculation as to the extent of further downside risk. The pound is down by over 2.3% year-to-date and around 13% since the U.K. voted to leave the EU in June 2016.
With a new prime minister due to be installed by the end of July, and no clear resolution on the horizon for the Brexit impasse, the losses might not stop here.
Jeremy Stretch, head of G10 FX strategy at CIBC, told CNBC’S “Squawk Box Europe” on Wednesday that the combination of no-deal Brexit risk, weak macro data and the Bank of England’s potential pivot towards cutting rather than raising rates meant there was still downside for the British currency.
“For many of the international investors I speak to, it’s very difficult to trade sterling other than being rather pessimistic about it until there is some degree of clarity,” he said.
Stretch added that since the EU is also “suffering from some of the collateral damage” of Brexit negotiations, it was not guaranteed that the bloc would grant the U.K. yet another extension to its departure deadline.
“There is going to be a degree of political fatigue I suspect in Europe, and I think if we do get to the October 17-18 summit with the U.K. still being in a position of not being in a resolved scenario, then unless the U.K. is seen to be doing something proactive, there will be some in the EU political sphere who will be pushing back against the extension, and that of course just adds to the uncertainty in terms of the sterling dynamic,” he added.
While the pound lodged tentative gains on stronger-than-expected U.K. economic data released Wednesday, it remains at the bottom of the market’s wish list in the short term.
Hamish Muress, senior currency strategist at OFX, told CNBC that sterling was in a “state of paralysis, torn between a surging dollar and its own weaknesses.”
“Whilst the pound is in such dire straits it is extremely vulnerable to the strengths of other currencies, particularly the U.S. dollar,” Muress said.
The pound did return to around the $1.25 mark upon comments from U.S. Federal Reserve Chairman Jerome Powell in a testimony Wednesday afternoon, however, which sent the dollar lower.
Major uncertainty
Former British Prime Minister John Major announced on Wednesday that he could take the government to court if either Johnson or his leadership rival Jeremy Hunt suspends parliament to force through a no-deal Brexit.
Muress suggested that whilst unlikely, this is “one of many possibilities that could “gather momentum and develop into an increased chance of another general election, an event that would significantly exacerbate volatility in the pound and lead to further uncertainty.”
“For the pound, political uncertainty limits any recovery that could be around the corner, and with growth flat and inflation within expectations, the Bank of England may be happy to sit on their hands when the time comes to make a decision on interest rates,” he added.
He credited the almost 5% fall in sterling over the last few months with causing headaches for U.K. businesses Wednesday’s trade balance data in which imports in trade and goods decreased by £7.3 billion ($9.1 billion).
The culmination of these factors, Muress projected, mean there is “not much short-term hope” for sterling.