Raw sugar futures on the International Exchange (ICE) leapt off the prior session’s near two-month low but remained stuck on a large weekly loss with a strong dollar and improving crop conditions in several producing countries putting the market on the defensive. 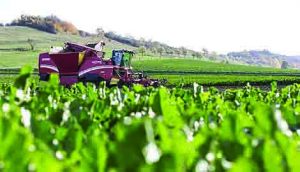 In a similar bearish condition, the July contract dipped to a weekly loss of about 5.2 per cent, majorly affected by losses across a wide range of commodity markets including grains and metals driven partly by a stronger dollar, market participants noted.

It was also observed that improving crop outlooks in top producers, India and Thailand, following favourable rains, the strong pace of production in Brazil during the second half of May and announcement by the Egyptian cabinet saying it has strategic sugar reserves to cover consumption for 5-1/2 months, contributed to the recent weakness in prices.

Commenting on the decline of the sweet commodity, Tobin Gorey, commodity analyst at Commonwealth Bank of Australia, said any calibration to sugar’s micro-fundamentals will have to wait until the ‘macro-quake’ ends. September arabica coffee gained 1.0 cent to $1.5260 per lb., while September robusta coffee rose by $21, to $1,619 a tonne. The September contract however recorded a weekly loss of 4.4 per cent.

Market watchers said the return of rains in top producer Brazil has also improved the outlook for next year’s harvest while coffee is also now flowing out of Colombia after recent disruption linked to anti-government protests.

For cocoa, September New York cocoa gained $16 to $2,397 a tonne. September London cocoa climbed 0.5 per cent to 1,636 pounds a tonne, but the contract suffered a weekly loss of 0.2 per cent for the week in conjunction with many other crop commodities.