U.S. businesses paid an additional $2.7 billion in tariffs in November 2018, according to data from a coalition of U.S. business groups fighting President Donald Trump’s trade tariffs. 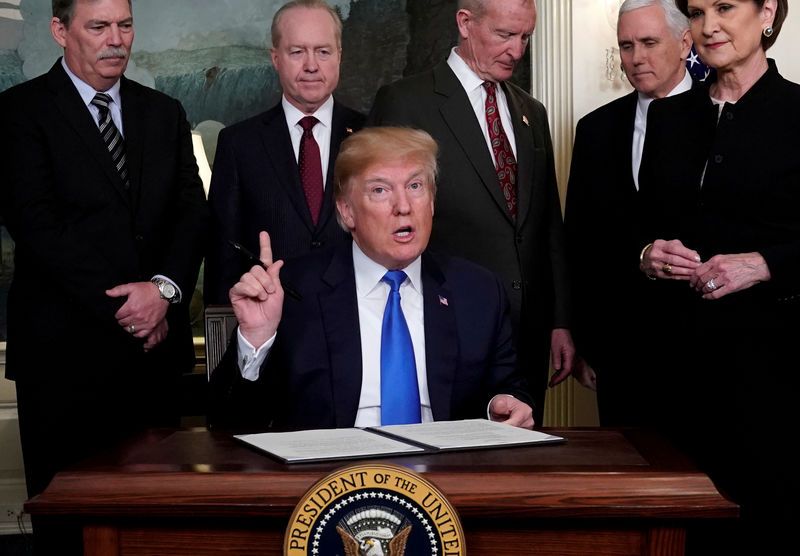 The group, which brands itself “Tariffs Hurt the Heartland” and includes the Americans for Free Trade coalition and Farmers for Free Trade, crunches tariff payment data nationally and by state.
The data is part of a monthly series called the Tariff Tracker, which the group releases in a tie-up with The Trade Partnership, a Washington-based international trade and economic consulting firm. The monthly import data, it said, is calculated using numbers from the U.S. Census Bureau, and the monthly export data is compiled using numbers from the Census Bureau and the U.S. Department of Agriculture.
The November numbers are the latest government ones available due to the recent U.S. government shutdown.
The group’s spokesman, former Republican congressman Charles Boustany, said the data shows Americans, not foreign competitors, are the big losers in the trade war.
“U.S. businesses are being hit by a double whammy of historic tax increases in the form of tariffs and declining exports as farmers and manufacturers lose opportunities in the overseas markets they rely on,” Boustany said.
The group also said retaliatory tariffs have severely impacted U.S. exports. In November, U.S. exports of products subject to retaliatory tariffs declined by $4.1 billion, or 37 percent, from the previous year, it said.
Hun Quach, vice president of international trade at the Retail Industry Leaders Association, said raising tariffs on thousands of consumer products will cause massive disruption to retailers in an already uncertain environment.
U.S. tariffs on $200 billion worth of imports from China are scheduled to rise to 25 percent from 10 percent if the two sides cannot reach a deal by a March 1 deadline. On Wednesday, U.S. Treasury Secretary Steven Mnuchin told reporters in Beijing that talks between the two sides were going well.
White House press secretary Sarah Sanders told Fox News that Trump is weighing different possibilities on how to treat the March 1 deadline to reach a trade deal with China, adding that the final agreement depends on Trump and Chinese President Xi Jinping meeting in person.
The United States would escalate tariffs on Chinese goods if the deadline is missed, and likely prompt China to retaliate.
Businessamlive Website Stats