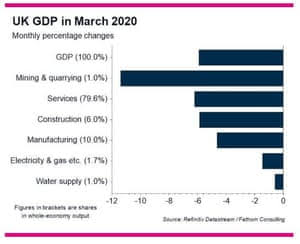 The economy of the United Kingdom (UK) took a two percent (2%) dive in the first quarter of 2020 as the coronavirus crisis saw activity contract at a record pace in March, official figures from the country’s Office of National Statistics (UK ONS) have shown.

The UK ONS said activity plunged 5.8% in March, sending first-quarter gross domestic product (GDP) tumbling in the biggest fall since the end of 2008 at the height of the financial crisis.

The latest figures show the first direct effect of the Covid-19 pandemic on the UK economy after the country was placed in lockdown to control the spread of the virus.

But with the lockdown only coming into place on March 23, the second quarter will show the full hit on the economy after the UK ground to a standstill.

Jonathan Athow, deputy national statistician for economic statistics at the ONS, said: “With the arrival of the pandemic, nearly every aspect of the economy was hit in March, dragging growth to a record monthly fall.

“Services and construction saw record declines on the month with education, car sales and restaurants all falling substantially.”

He added: “The pandemic also hit trade globally, with UK imports and exports falling over the last couple of months, including a notable drop in imports from China.”

The March fall is the worst since records began in 1997, while the first quarter drop is the biggest since the UK economy contracted by 2.1% between October and December in 2008 in the recession that followed the financial crisis.

It also compares with zero growth in the final three months of 2019.
But the ONS cautioned there was more uncertainty than normal over its first GDP estimate, given the challenges of collecting economic data amid the lockdown.

And there is far worse pain to come, with the Bank of England last week warning coronavirus could see the economy plunge by a further 25% in the second quarter and fall by 14% overall in 2020 – the worst annual fall since records began.

The bank also said Britain’s unemployment rate could hit 9% between April and June as the lockdown batters firms across the economy.
The Resolution Foundation think tank warned that the first quarter drop was an “ominous sign of things to come”. 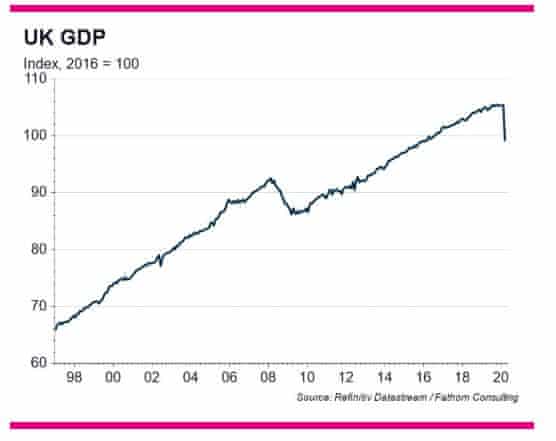 James Smith, research director at the think tank, said: “The lockdown was only in place for seven working days in the first three months of the year.

“But it was still enough to bring about the biggest quarterly economic contraction since the peak of the financial crisis and the weakest single-month change on record.

“With the country in full or partial lockdown well into the second half of the year, the grim economic milestones hit in the latest data will be shattered next time around.”